THUNDER BAY, Ont. (U SPORTS) – Day 2 continued at the U SPORTS/Curling Canada Curling Championships Sunday with Draws 2 and 3, showcasing the best in the country hosted by Lakehead University.

Draw 2 began Sunday afternoon with the University of Alberta’s Kristen Streifel being the only unbeaten women’s team after two rounds of play. 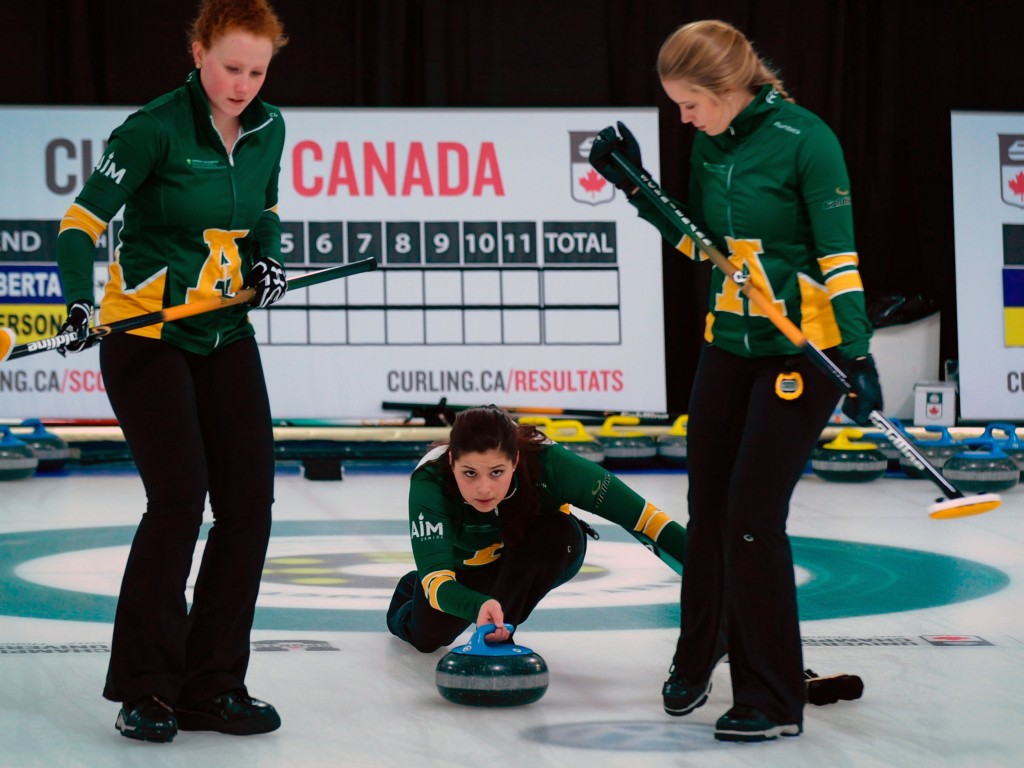 In other women’s games, 2016 world junior women’s champion Kristin Clarke and her Dalhousie Tigers rink jumped into the win column with a convincing 10-1 win over the Laurentian Voyageurs, skipped by Krysta Burns. Clarke stole points in four consecutive ends en route the the victory,evening both schools’ records at 1-1.

The StFX X-Women also won their first game of the competition 7-4 over the UNB foursome, skipped by Justine Comeau, who fell to 0-2 StFX Skip Emma Logan fell behind 4-2 after seven ends but rebounded with a pair in the eighth, then stole two points in the ninth, and a single in the 10th end for the win.

Finally, Haylee Jameson’s Regina crew shook off a bit of unexpected jet-lag, earning their first victory by defeating the host Lakehead Thunderwolves 10-5. Jameson’s rink was stranded Friday night in Winnipeg with flight delays, forcing a long day of travelling and curling on Saturday.

2015 U SPORTS champion Thomas Scoffin of the Alberta Golden Bears earned his first victory, after a well-played game by both teams, stopping Queen’s 7-5. Despite some great shot-making, the Kingston-based foursome dropped to 0-2.

The teams were back on the ice a few hours later for Draw 3 , beginning with StFX and Regina on the women’s side. StFX picked up two points in the 10th to earn the 5-4 win that put them at 2-1 in the tournament.

Meanwhile, Clarke and Dalhousie faced the challenge of undefeated Alberta and trailed only by one after four ends. However, the Pandas showed why they are one of the top teams in the country defeating the Tigers 8-4, remaining undefeated at 3-0 in the round robin.

Laurentian had a 6-0 lead over UNB after five ends and finished the night with an easy 9-2 win. The Voyageurs now stand at 2-1, while the Varsity Reds fell to 0-3. 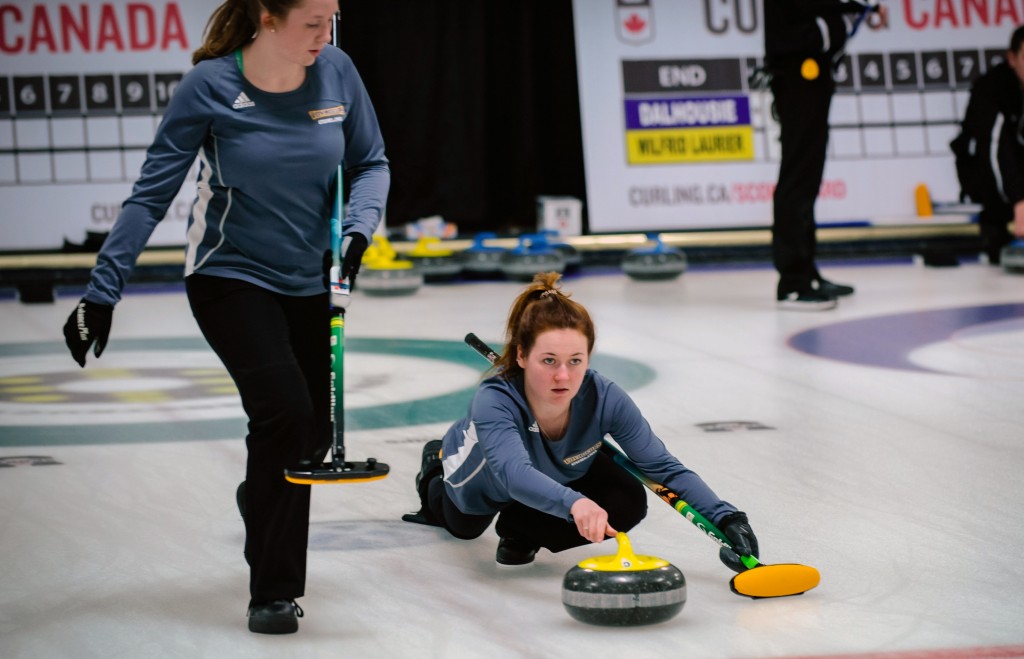 After a tough loss earlier today, Beaudry and the host Thunderwolves bounced back, capturing a 5-4 win over Ryerson.

On the men’s side, Dalhousie’s Mayhew paced the Tigers in the first two ends to a 2-1 lead over Laurier. After two blanks and another single point from Dalhousie, the Golden Hawks put themselves back on the board with a key shot from Hall that gave the team four points. Laurier continued their roll into the seventh end with a steal of two, knocking off the undefeated Tigers, 9-4

“We played really well and it was a great bounce back from this afternoon . We went down early in the game and I really like how my guys stayed patience, stayed relaxed and we were able to get things going our way and came out with a good game,” said Hall, who has also been performing the national anthem prior to the beginning of the draw. “We didn’t expect to get that big shot in the sixth but it was a huge swing and it was definitely a big confidence boost”.

In their second match of the day, Memorial had a slim 2-1 lead after three ends and led 5-1 after four holding on to edge Alberta 8-6. The loss dropped Alberta to a surprising 1-2 record.

UPEI picked up their first win of the round robin taking down Queen’s 7-6.

Host Lakehead struggled in their game against Regina, with the Cougars taking a key four in the sixth and three more in the eighth to sealed a 10-4 win.

Round Robin play continues Monday afternoon at 2:00 p.m. EST at the Fort William Curling Club in Thunder Bay with Draw 6 following at 7:00pm.

The semifinals and medal games will be played Wednesday, March 22.