March 21, 2017
THUNDER BAY, Ont. (U SPORTS) – The 16 teams competing for the U SPORTS/Curling Canada Curling Championships continued play on the fourth and final day of the round robin, looking to solidify their position in the playoffs set for Wednesday morning.

The day began with Draw 6 and Lakehead’s Hailey Beaudry, leading her team to a big 10-6 win against the StFX X-Women’s Emma Logan. The Thunderwolves took an impressive six points in the 7th to seal the deal and put the Thunderwolves at 3-3 alongside three other teams.

Meanwhile, 2016 world junior women’s champion Kristin Clarke pushed past the UNB Varsity Reds by a single point, after stealing two points in the 10th. The Tigers’ 8-7 win over UNB pushed their record to 3-3.

“The tournament is going well so far, we are really enjoying the experience,” Clarke said after the game, as her rink prepared to face Ryerson (2-4) in Draw 7. “We definitely have had some up and down games and struggled to get a feel for the ice early on in the event, but I feel we are finally starting to get a read on it and what it is doing. That has allowed us to build some momentum.

“We are feeling confident about tonight and will know to keep an eye on the speed as the game progresses and that will help us make sure we are at our best.”

The Alberta Pandas easily edged Laurentian’s Krysta Burns 13-2, for their sixth straight win of the tournament. Alberta, who, would face host Lakehead in their final match in search of a perfect record, had won every game of the tournament by at least four points.

Elsewhere in the draw, Regina defeated Ryerson 7-6, taking two points in the third, fifth and eighth ends, pulling the Cougars and Rams even at 2-4 with one game to play.

One the men’s side, UPEI picked up their fourth consecutive win, with Chris Gallant defeating Regina in a convincing 7-2 victory. The win bumped the Panthers up to 3-3 and second place behind Memorial.

But the Sea-Hawks maintained top spot and their perfect record in the round robin with a win against Dalhousie. Despite trailing the Tigers 5-1 after five, Memorial scored two in the sixth, then earned an unlikely steal of two in the 10th when skip Robert Mayhew came up light in a draw to the eight-foot.

Wilfrid Laurier’s Matt Hall took down Alberta’s Thomas Scoffin 6-4, while Queen’s defeated host Lakehead in a tough 5-4 matchup, to tie the Golden Bears and Golden Hawks at 3-3 in the standings and fighting for a playoff spot.

With multiple teams tied, Draw 7 would play an important role in who would compete in the semifinals Wednesday morning.

In women’s action, the Thunderwolves had a three-point advantage over Alberta at the end of the fourth but Alberta brought it within one by the end of the ninth. Alberta’s Streifel stole two in the tenth that solidified the Pandas 8-6 win and a perfect 7-0 record in the round robin.

Dalhousie joined Lakehead by securing its berth in the playoffs, after a 9-8 win over Ryerson to finish with a record of 4-3.

Laurentian took two points in both the third and fourth ends to take a 4-0 lead against StFX and Burns carried her team to a 5-2 over the X-Women, qualifying the Voyageurs also at 4-3.

Finally, UNB finished the tournament with a 9-3 win over Regina that would move them to 3-4.

With round robin play has wrapped up, Alberta (7-0) will take on Lakehead in one semifinal on Thursday.  The Thunderwolves finished tied with UNB and StFX at 3-4 for the final playoff position, with all three teams 1-1 head-to-head. Lakehead earned the tiebreaker, thanks to the last-stone draw rule, where the host team ​ranked first, followed by UNB third and StFX fourth.

Dalhousie finished tied with Laurentian at 4-3 but earned the second seed by virtue of their round robin win over the Voyageurs. The Tigers will have the choice of hammer stone colour on Sheet D, on Wednesday morning in the semifinal, while Alberta has both hammer and colour choice against Lakehead.

On the men’s side, Memorial (7-0) kept their winning steak intact with a 9-6 victory over Queen’s. The Gaels remained close throughout the entire match until the Sea-Hawks took single points in both the eight and ninth.

Laurier struggled in their final game with Regina, falling 10-2, scoring a point in the sixth and eighth. The loss eliminates the defending champions, while Regina wrapped up play tied at 3-4 with four other teams.

In his team’s final match, Dalhousie’s Mayhew edged Lakehead’s Dave Henderson 5-2, taking three in the fourth and another pair in the eighth. The loss ends the host Thunderwolves run at the national title, finishing last at 1-6.

Elsewhere, Alberta stamped their ticket to the semifinal, taking down UPEI with an impressive 10-3 decision. 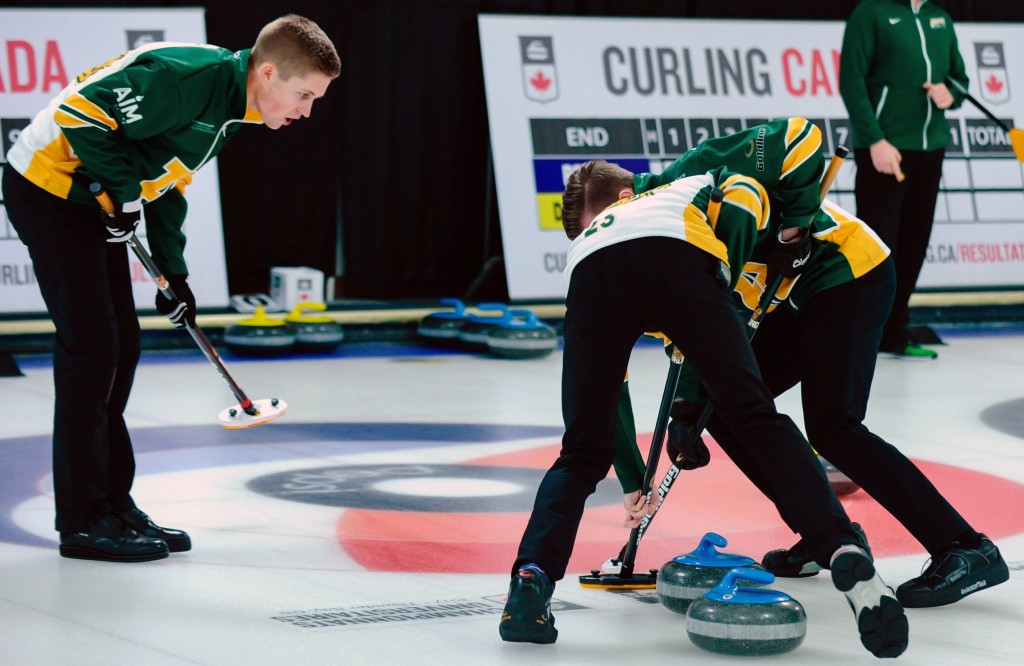 “So far it’s been a grind – we have had to battle for every shot and the wins have not come easy so we are working hard but we are just happy to have qualified for playoffs,” said Scoffin. “We are looking forward to tomorrow. This is what we have worked for all year. We are ready and prepared, so we are just going to come out and do what we know and we will be in good shape.”

No. 1 Memorial will play Regina in one semifinal, after the Cougars earned the final playoff position via head-to-head tiebreaker among four teams tied at 3-4. Regina and Queen’s both went 2-1, while Laurier and Dalhousie were 1-2, with the Cougars having defeated the Gaels 5-4 on the opening day to earn the fourth seed.

Memorial will have hammer and colour choice on Sheet E against Regina on Wednesday.

Alberta and UPEI tied for second at 4-3, but the Golden Bears earned second place, after beating UPEI 10-3 also on the first night of the competition. Alberta has choice of hammer or colour on Sheet F in Wednesday’s semifinal.

The four semifinal matchups get underway Wednesday at 9 a.m. ET, with the medal matches to follow at 2 p.m. ET.