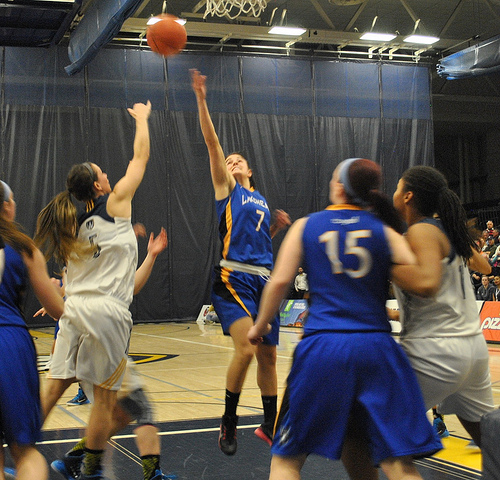 The OUA women’s basketball Final Four tournament didn’t go the way the Thunderwolves had planned on Friday, as Windsor came away with a 57-31 win.

It had been over 12 months since Lakehead had played in Windsor’s St Denis Centre, which had a strong showing of home town support for their Lancers.

Lakehead mustered through the hostile environment in the first quarter, trailing 15-8 after ten minutes, with Jylisa Williams scoring all 8 Lakehead points.
Williams would score two more points early in the second quarter before the complexion of the game changed drastically and with disastrous results.

With just three minutes gone in the quarter, Williams was fouled on an inbounds play, taking a shoulder to the face on a blind screen from Windsor forward Emily Prevost at centre court. Williams crumpled to the floor, the play whistled down. After several minutes she arose and left the court and proceeded directly to the trainers’ area to receive treatment.

In her absence, the ‘Wolves were hapless against the Lancers, being held scoreless the remainder of the quarter. The Lancers meanwhile took advantage, scoring 20 points in the quarter and leading 35-10 at the break.

It was clear after halftime that the CIS leading scorer would not be returning to the game, having suffered a concussion with consequent stomach sickness. Williams remained in the locker room for the remainder of the game.

The ‘Wolves would regain some of their stride in the third quarter, outscoring the Lancers 13-12, thanks in part to Cassandra Soulias, who scored 6 points in the quarter, and Katelyn Andrea, who hit a buzzer-beating three to cut the lead to 47-23.

The veteran Lancers would keep the clock moving in the final quarter, as the ‘Wolves could do little more than watch their season draw to a close.

For the Lancers, Korissa Williams scored 21 points with 11 rebounds.

As a team, the Lancers grabbed 23 offensive rebounds, which served to negate Lakehead’s fairly sound defense throughout the game. Cheyanne Roger and Korissa Williams had 7 offensive boards each, Roger grabbing a total 15 rebounds.

“It was a tough way to go out. We all hope that Jylisa is ok. She’s the heart and soul of our team and was so upset at herself and even apologized to her teammates at half time. We truly had an amazing season and we appreciate the support we received all season long. We wish Katie, Corina and Jylisa well as they move on but we are looking forward to next year as the experience we got this season is invaluable to our returning players.”

Jylisa Williams was honored in a pre-game ceremony by the OUA for her efforts this season. The various presentations to her included her single game and single season scoring records, and the OUA Player of the Year award.