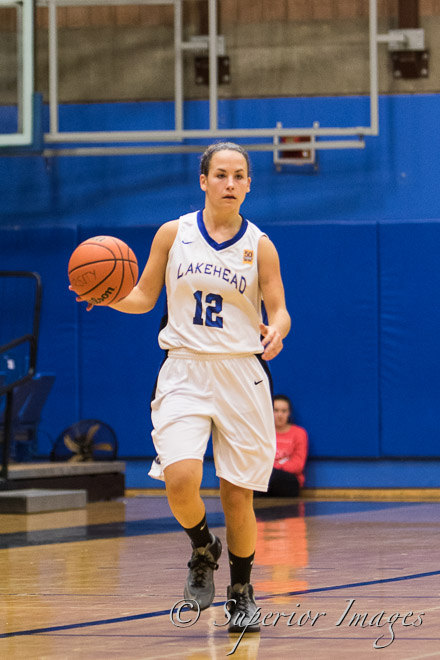 “Tough loss to Regina today after playing so well for 37 minutes. Extremely proud how we executed and stuck to our game plan but in the end free throws (9-18) and great pressure defense by Regina in the last 3 minutes was the difference”, said Coach Kreiner after the game.

During the third quarter, Bridget O’Reilly hit a three pointer putting the ‘Wolves up 13 and giving them their biggest lead of the game. Lakehead finished the quarter leading 56-46.

The fourth quarter came to become a different story, as the Cougars slowly chipped away at the score as they went on an 11-0 run in the last 4 minutes.

Down 3 and less than 8 seconds left, the ‘Wolves drew up a play to tie the game but were unable to knock down shots. The ‘Wolves only scored 8 points in the fourth quarter compared to Regina’s 19.

Free throws were a problem for Lakehead tonight as they were only 9-18 from the line.

Jerika Baldin was player of the game with 7 points, 9 rebounds and 8 assists. Bridget O’Reilly was the leading scorer for the ‘Wolves with 21 points and 6-13 from the three point line.

“It was a lost opportunity but one that will make us a better team.”

The T-Wolves will play their last game at the HoopFest Tournament tomorrow at 10:00am (MDT) against the University of Toronto.

It will be their last non-conference game before heading into the regular season on November 5th.