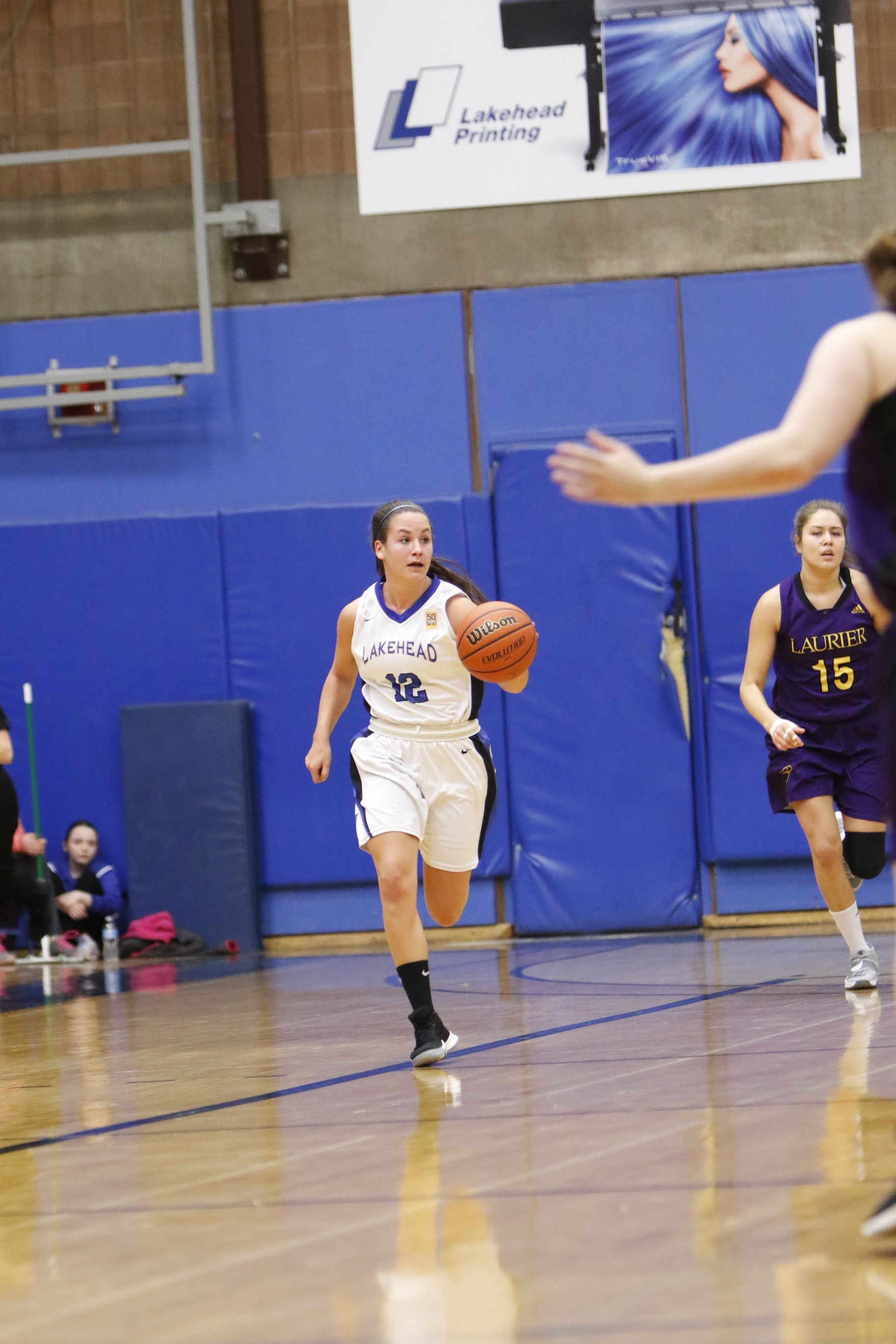 The Lakehead women’s basketball team beat the Laurier Golden Hawks 74-60 in round 1 of the OUA Playoffs tonight on home court. 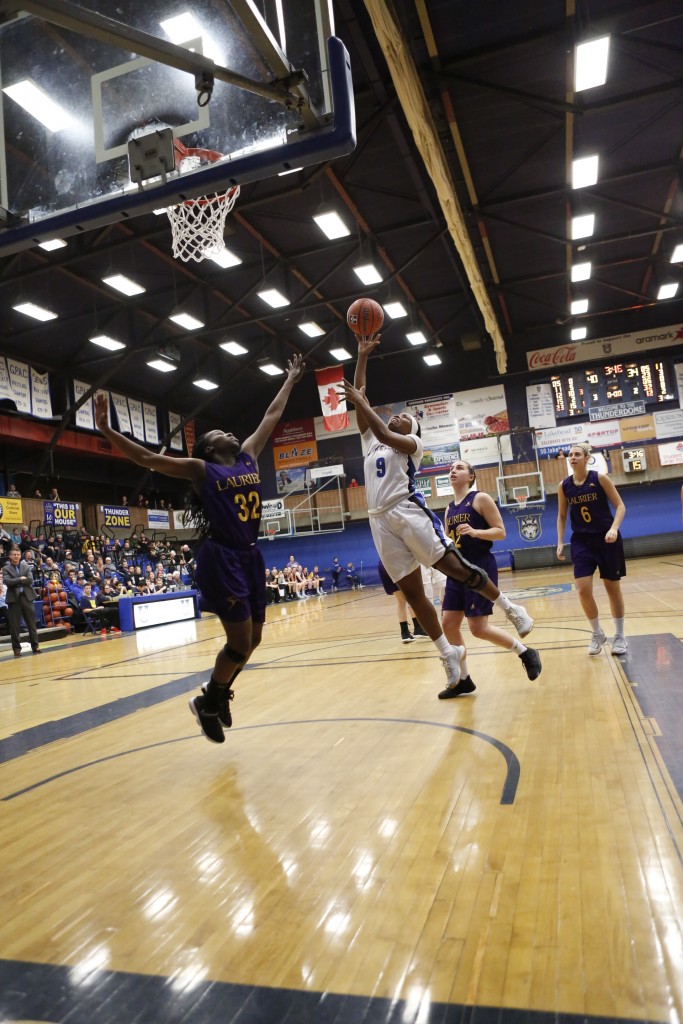 It was a close first 5 minutes of the game, as both teams understood what was at stake. Lakehead pushed ahead nearing the end of the first going on a 14-0 run to give them a 19-6 lead. Lakehead maintained their energy in the second and led 30-15 going into the half.

After being down 17, Laurier was able to capitalize on Lakehead’s turnovers and hit some big shots. The Golden Hawks brought it within 5 but the Thunderwolves re-grouped in the fourth. Lakehead got their offense going while continuing to go hard on the boards and walked away with the 74-60 win at the final buzzer.

“We had a lot of grit tonight when Laurier stormed back. We had a very strong first half defensively but Laurier found some weaknesses and exploited them well in the third quarter. Tiffany was really big for us going 5-5 in minimal minutes at key times. I thought many of our young players stepped up at times and made some positive contributions. When we move the ball good things happen and we will need great ball movement when we play Windsor.” – Coach Jon Kreiner

Leashja Grant put up 27 points with 16 rebounds tonight and Jerika Baldin had 13 points, 9 assists, and 6 rebounds. Tiffany Reynolds had a great game back from an injury with 11 points. Lakehead out-rebounded Laurier 50-28 and had 24 total assists. 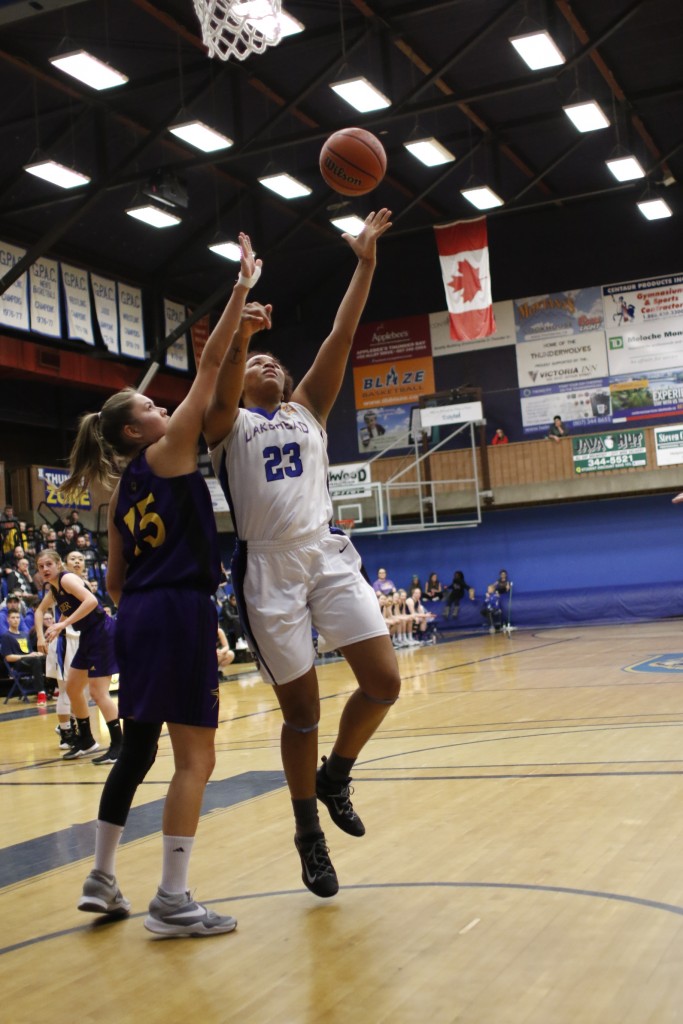 The Thunderwolves will now advance to the quarterfinals to face the West Division’s second seed, Windsor Lancers on February 24 at 7:00pm. Lakehead faced Windsor earlier in January losing both nights, 67-56 on Friday and 72-57 on Saturday. The Lancers finished the regular season off 20-4 with their losses coming from McMaster, Carleton and Queen’s. Lakehead will need to focus on shutting down Emily Prevost, who is averaging 15 points per game, as well as any of their other strong shooters who can spot up anywhere.

“Once again we feel extremely privileged for this opportunity to move on and play a quarterfinal matchup vs Windsor. We struggled earlier in the year to contain Windsors Transition game and shooters and we also struggled to score at times. Windsor is a very experienced team with good size, great shooters and they are a very strong running team due to their rebounding prowess and athleticism. We will need to make sure we play our game, work hard on defense and rebound the ball well. We need to take care of the ball against Windsors pressure defense and find ways to get good looks.”