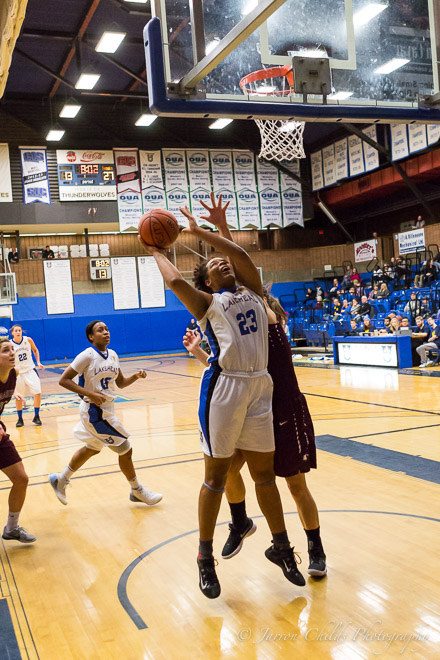 The Lakehead women’s basketball team (15-8) won 60-58 against the Laurier Golden Hawks (10-13) in overtime tonight in the Thunderdome.

Slow start for both teams as the Hawks only led 19-18 at halftime.

Laurier pulled ahead by 9 in the third but the Wolves stayed in it, making it a two-point game going into the fourth.

Lakehead opened the fourth with an 8-0 run but the Hawks brought it within 2 with just 20 seconds left. Laurier’s Maya Day hit a long jumper with 11 seconds left to tie the game up at 49-49 and force the game into overtime.

With five extra minutes, the game continued to remain close. Up one after Golden Hawk Nicole Morrison hit a three, the Wolves were able to keep possession with 14 seconds left after a big offensive rebound by Tianna Warwick-Dawkins. Bridget O’Reilly hit one of two free throws at the end to give the Wolves the 60-58 win.

Once again, Leashja Grant led all players with 27 points, 16 rebounds and also made history moving into first place in the U SPORTS for most rebounds in a single season with 318. The previous record holder was Sarah Wierks of Fraser Valley who led with 307 in 2014-15.

“Tonight was a weird game for both teams as we both had our playoff fate set before the game started. It was a little about feeling each other out and we both struggled to score in the first half. Leashja needed 5 rebounds to get the U SPORTS season record and grabbed 16 which is a huge accomplishment as Sarah Wierks was a phenomenal player.”– Coach Jon Kreiner

The Wolves and Hawks will meet again tomorrow at 6:00 pm in the Thunderdome. Lakehead seniors will be honoured directly after the women’s basketball game and before the men’s tip-off at 8:00 pm.