The Thunderwolves finished the regular season with a record of 9 wins, 3 ties, and 8 losses, good enough for the fourth and final seed in the playoffs. In the semi-final game, the ‘Wolves pulled off a huge 1-0 upset win over the #1 seeded Rainbow Realty by virtue of a goal scored by Thiago Goncalves with 2 minutes remaining.

The LU men’s soccer club kept that momentum rolling into the championship game against the Thunder Bay Chill Reserves. After trailing 1-0 at the half, Lakehead scored three times in the second (25 minute) half, getting goals from Haidar Hatoun (‘35), Thiago Goncalves (‘46) and Arthur Amorim (‘49). 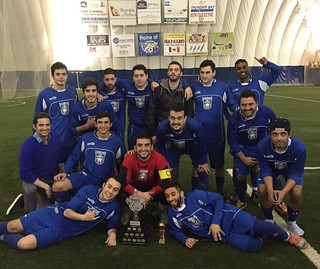 “The players were committed, consistent and passionate about the game,” said Lakehead coach Eraldo Vero in an interview earlier this week. “As a result of that we were able to work effectively as a team, not only on the pitch, but in practice as well. When you put those things together, phenomenal results are possible.”

This is the first time that the Lakehead club team has won the city’s PSL championship, which features the elite soccer players in Thunder Bay aged 17-40, with the Thunderwolves’ team made up of students aged 18-25. Lakehead’s Angelo Neto was named as the league’s best goalkeeper for the season.

Coach Vero continues, “After the success in the championship game last week, next season is looking good, and we hope to add some players to the roster next year that will help to continue our successful run.”