Lakehead University Athletics is proud to announce the first of 2022’s Wall of Fame inductees: Scott Morrison, as a builder. 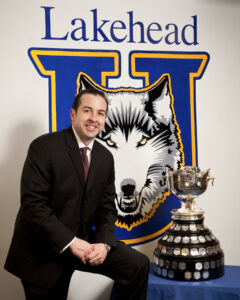 Lakehead University Athletics is proud to announce the first of 2022’s Wall of Fame inductees: Scott Morrison, as a builder.

“Scott was a major part of turning our men’s basketball program into the respected, nationally-competitive program it is today,” Lakehead University Athletics Director Tom Warden says. “He not only brought our teams lasting success, but helped guide numerous student-athletes in their growth as players and as people.”

Scott Morrison, who is from Morell, Prince Edward Island, became head coach of the Lakehead University Thunderwolves men’s basketball team in 2003. He held the position for 10 seasons and is the winningest coach in the program’s history.

Under his leadership, the men’s basketball team made four CIS (now U SPORTS) national Final 8 tournament appearances, collecting a national silver medal in 2013 as a 7th seed. His teams also collected OUA bronze medals in 2010 and 2013, and an OUA championship in 2011. Morrison was named OUA West Coach of the Year three straight seasons from 2009-10 to 2011-12.

However, the path to glory was not an easy one. Morrison inherited a team that hadn’t had a winning season in two decades, and in his first four seasons amassed a record of 33-99 as he worked to establish a winning culture, to build the habits and foundation upon which later success would come.

“In hindsight, the most satisfying part of that period was the fact that we really struggled for the first half of my time at LU and then turned things around in a major way,” Morrison says.

Despite those initial struggles, Morrison nevertheless left Thunder Bay with a winning record as a coach, as his final seasons—guiding a team Thunder Bay media affectionately nicknamed the Heart Attack Pack for their penchant for pulling out gutsy victories in late situations—amassed a four-year record of 117-39.

The Heart Attack Pack will also be enshrined in the Lakehead University Athletics Wall of Fame this Fall.

“I’m just really excited that our teams from that era are being inducted,” Morrison says. “We were always a close-knit group and share a bond that will now be immortalized on the Wall of Fame, which is the ultimate honor in university athletics.

“The credit belongs to the players we brought in who stayed in Thunder Bay to train 11 months a year,” Morrison adds, “and also Tom Warden and former Lakehead President Fred Gilbert who resisted the urge to fire me multiple times in those first few seasons.”

“Those were some of the most exciting teams Thunderwolves men’s basketball has had,” Warden says, “and you can see the impact Morrison’s leadership had, from numerous players becoming involved with coaching following their careers. Our current head coach, Ryan Thomson, played under Morrison, and so it’s great to see that family legacy here in Thunder Bay.”

“The most important and rewarding part of all of this is the long-term relationships that have been formed with many of the players and coaches who were apart of our program during those ten seasons, many of whom I communicate with daily or weekly and many more who I don’t speak to regularly but would not miss a beat should we cross paths at some random location,” Morrison says. “We always considered ourselves to be the ‘closest’ team in the country due to our travel and shared experiences of moving to Thunder Bay for a common goal, and that has been proven time and time again long after our time together on the court ended.”

Since leaving Thunder Bay, Morrison has gone on to success in the NBA Development League (now NBA G-League) as a player development coach and then head coach with the Maine Redclaws, where collected yet another coach of the year award, this time being named NBA D-League Coach of the Year. He then went on to serve as an assistant coach with the NBA’s Boston Celtics for several years before moving to Australia to assume head coach duties for the Perth Wildcats of the National Basketball League, a top-level international league. Throughout that time Morrison has also been involved with Canada’s national men’s basketball program.

“Lakehead had a lot more impact on me than I had on Lakehead,” Morrison says, deferring credit for his numerous accomplishments. “I moved to Thunder Bay as a kid and left as a slightly more mature and older kid! But really I learned an incredible amount on and off the court. I made a lot of mistakes, but the great players and co-workers during that time kept the ship afloat and headed in the right direction.  I was just blessed to get the chance to work with understanding, dedicated and selfless people during that time.”

“Scott has done so much for Thunderwolves Athletics,” Warden says. “It speaks volumes that he not only helped lead our men’s basketball program to great heights, but has continued to enjoy success at every step since.”

Morrison’s name, of course, continues to reverberate in the Thunderdome, passing through the crowd on gamedays like wind in the trees. When asked what it means to him to be such a respected figure in Thunderwolves history, he is characteristically modest.

“To be remembered by Thunderwolves nation—let alone be inducted into the Wall of Fame—is an incredible honour and something I will be proud of as long as I am on this earth.”

The Lakehead University Athletics Wall of Fame induction ceremony will take place this Fall as part of homecoming weekend, on Saturday, October 22nd, 2022.