Lakehead University women’s basketball is pleased to announce that 5’8” guard Tianna Warwick-Dawkins has committed to the Thunderwolves for the 2017-18 season. Tianna played for the Durham Elite OSBA team this past season and will study in the Honours Bachelor of Psychology program at Lakehead University. 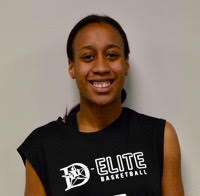 Head coach Jon Kreiner has this to say about his newest recruit;

“Tianna Warwick-Dawkins completes a very strong and versatile recruiting class. One of our goals this off-season was to get stronger defensively while adding size to our backcourt. Tianna has very good size and length for her position. She is a very smart player that can play all the guard positions. Tianna was brought in on the strength of her defense, her experience playing at the highest of levels in Ontario and her ability to push the ball in transition, making solid decision on the run as well as her passing ability. I also feel strongly that Tianna has a strong upside on offense and can develop into a solid contributor on the offensive end.”

Tianna Warwick-Dawkins says; “I am excited to start my career as a Thunderwolf with a great group of people. The players are friendly and I can see how great the team chemistry is. I know they will push me as a player and I am comfortable to do the same for them. The coaching staff sees the potential in me and are willing to help me develop my game to become successful at the next level. The school is beautiful and I am happy to be entering into the psychology program where I know they will help me accomplish my goals in life.”

Former rep and AAU coach Dale Harris has a lot of experience coaching Tianna. He sees her fitting in right away; “Tianna Warwick-Dawkins is a 5’8 strong, defensively minded combo-guard who can handle the ball vs. pressure and executes offense in the half-court game. She possesses a high basketball IQ and passes the ball well in traffic. Tianna is a basketball enthusiast who spends her spare time reading and giving back to the community by coaching at youth basketball camps. Tianna will be a great fit for Lakehead University.”