Lakehead Men’s Basketball is proud to announce the commitments of Michael Okafor of Toronto, Ontario and Dylan Morrison of Toronto, Ontario. Originally members of the 2017 graduating class, Dylan was the 41st ranked player in the country and Michael 50th by North Pole Hoops.

Michael, a 6’4 combo guard, has spent the past three seasons competing south of the border, most recently with the Manhattan Jaspers (D1). Previously Michael attended Harcum JC alongside Dylan.

This past season, Michael appeared in 24 games, starting 4 for the Jaspers. He had his most impressive game against Iona College against when he recorded 5 points, 5 rebounds and 2 steals in 15 minutes.

“Michael is a great kid who will make an immediate impact on our program with his athleticism and ability to get to the rim and finish. We’re excited to get on the court and help Michael continue to improve as a player” said Coach Thomson.

“Going from school to school, in my basketball journey, I felt like coming back home to play was the best option. Playing against the best and being the best team is what I want. And I feel comfortable playing at Lakehead, both because of the coaching staff and the players.” said Michael.

Dylan, a 6’6 wing, has spent the past three seasons competing south of the border, most recently with the Lamar Cardinals (D1).

This past season, Dylan appeared in 9 games for the Cardinals. Dylan’s best outing of the season came against UAB when he posted 4 points, 3 rebounds and 3 blocks in 26 minutes.

“Dylan brings length, athleticism and versatility to our team. He has great instincts on the defensive end and is able to handle the ball, create and finish at the rim.” said Coach Thomson about his newest recruit.

“To play professionally will always be a dream of mine, I feel coming back home to play at Lakehead with help from the staff and players will help me make this dream a reality.”

Dylan and Michael both had a chance to play for former Thunderwolves star Yoosrie Salhia. Yoosrie, Lakehead Men’s Basketball all time leading rebounder and a top ten all-time scorer, had this to say about Dylan and Michael.

“Michael and Dylan are two unique athletes that bring it on both ends of the floor. Their length, athleticism, and skill set will prove to be great additions to the Thunderwolves.  More importantly, Lakehead is getting two high character young men, with great work ethic, and a team oriented mentality. ” said Coach Salhia. 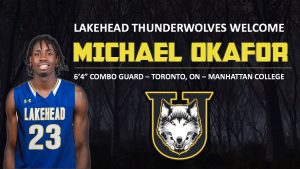 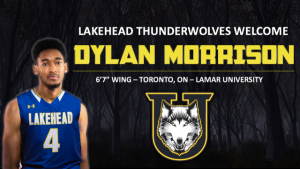