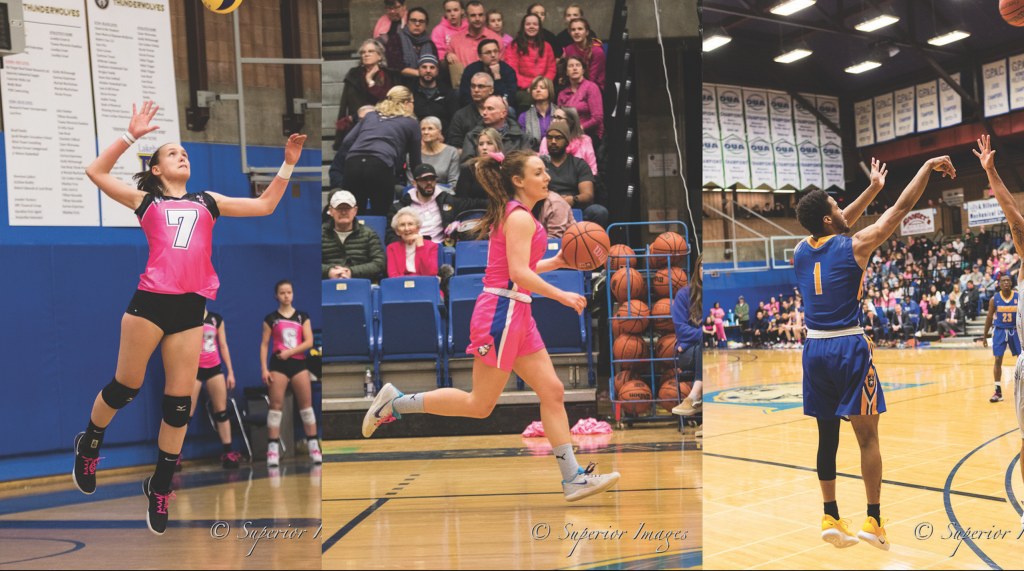 The Lakehead Thunderwolves are preparing for their first home weekend of 2020. This upcoming weekend of games will include the annual Bell Let’s Talk games on Friday and the volleyball and basketball Think Pink triple header games on Saturday.

Lakehead’s men and women’s basketball teams will kick off the weekend with a doubleheader against the Laurentian Voyageurs on Friday, Jan. 24th.

“It’s been a long while but we are finally playing our first games at home since November 30. These are two very special games,” said women’s basketball head coach Jon Kreiner.

“Friday is our Bell Let’s Talk game while Saturday is our annual Think Pink ‘Shoot for the Cure’ game.”

Since the 2014-15 season, the Thunderwolves women’s basketball team has a 4-1 record against the Laurentian Voyageurs, who are currently battling through a nine-game losing streak. The Voyageurs 2-12 record this season, most recently falling to the Nipissing Lakers. The Thunderwolves and Voyageurs will meet on the court at 6:00 pm on Friday.

“These games are also very important with respect to our push for the playoffs. We are in a battle with the next three teams we play for a playoff spot,” said Kreiner.

“Laurentian has been on a scoring tear of late and are led by one of the best point guards in the league in Kayla Deschatelets. Laurentian has also recently picked up a very strong player in Helena Lamoureux who is a very tough matchup as she can shoot, drive and is very long and athletic. Bailey Tabin is also a player that can get going quickly so we must keep her in check.”

Following the women’s matchup, the Thunderwolves men’s basketball team, currently ranked sixth in USports with an 11-3 record, will face off against the Voyageurs men’s team, currently ranked seventh in USports with a 10-4 record. Since the 2014-15 season, the Thunderwolves have a 2-3 record against the Voyageurs and will be looking to break a 3 game losing streak against them.

“This weekend we have two good teams and the reigning player of the year with Laurentian,” said Thudnerwolves men’s basketball head coach Ryan Thomson.

“They’re a tough team who plays fast and can get hot from the three. We have to be disciplined  and play together.”

Saturday, Jan. 25th will mark the Thunderwolves 12th annual Think Pink games. Since 2012 the Thunderwolves women’s basketball and volleyball teams have raised more than $64,000 in support of the Northern Cancer Fund for Breast Cancer, prevention, research and treatment.

“Looking forward to opening up the second half at home. It’s an exciting weekend with a great cause. We are happy to support the think Pink cause,” said women’s volleyball head coach Craig Barclay.

“We welcome a team in Windsor who is also looking for a groove in the OUA West. It should be an exciting weekend all around and we’ll be looking to see how we have learned from the last two weekends on the road and how we will implement that at home this weekend.”

The party will continue with the women’s basketball team, who will face off against the Nipissing Lakers at 6:00 pm on Saturday. The Thunderwolves are undefeated against the Lakers, going 5-0 since Nipissing joined the league in 2014. Nipissing currently has a record of 3-11 and recently broke a six-game losing streak with a win over the Laurentian Voyageurs.

“Nipissing had two close games vs Ottawa & Carleton recently and have been lead by Natalie Martinez. She’s put up huge numbers recently. Nipissing likes to change it up on defence and trap a lot so we’ll need to be ready and alert on offence.” said Kreiner.

“We are looking forward to playing in front of our THUNDERDOME crowd again and we hope our fans come out to support our team, Bell Let’s Talk (Friday ) and THINK PINK!”

The Thunderwolves women’s volleyball team will wrap the weekend up with a 1:00 pm game against the Lancers on Sunday, Jan. 26.