Jylisa Williams and several of her teammates from the women’s basketball team, along with coach Lou Pero and Director of Athletics Tom Warden gathered with council at City Hall on Monday evening for the presentation of the Citizens of Exceptional Achievement Award. 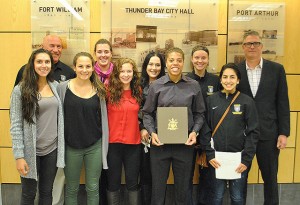 The award recognizes individuals and groups who have achieved distinction in the area of sports, culture and community service.

Jylisa Williams was presented the award in recognition of her incredible contributions on the basketball court as a Thunderwolf during her two years at Lakehead University. In particular, Williams set new Ontario University Athletics records for points in a season (548) and points in a game (50), the latter of which had stood for 32 years.

She is also the first women’s basketball player from Lakehead to be recognized as Canadian University Sport’s Player of the Year.

Councillor Linda Rydholm and Mayor Keith Hobbs presented Williams with the award at the beginning of Monday’s City Council meeting.