Lakehead’s women’s basketball team beat the Guelph Gryphons 79-71 in the quarter-final of the OUA playoffs Saturday night. Despite Guelph holding a lead for a brief 48 seconds all night, the Gryphons put together a series of runs that never let the Thunderwolves take their foot off the gas. Lakehead advances to play the Ottawa Gee-Gees in the Critelli Cup semi-final on Wednesday, February 27th.

“Well we knew Guelph would bring it as they always do,” Thunderwolves head coach Jon Kreiner said. “They’re tenacious and well coached.” The two teams met during the regular season at the beginning of January, and though Lakehead won both games, they took the weekend by a combined 13 points, including a one-point victory in the first night. 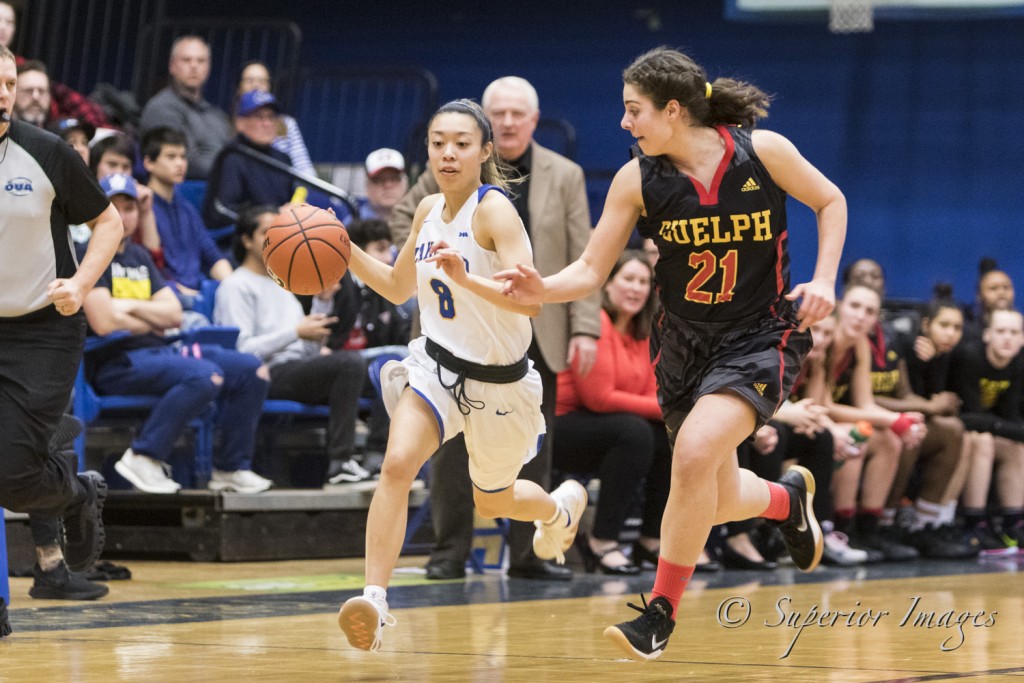 Tonight’s match was a similar affair, with both teams pushing the ball right out of the gate, and after three lead changes, the Thunderwolves stayed ahead to close the first quarter up 20-14. Lakehead’s Leashja Grant battled through double teams all night, but despite the resistance, finished the opening period with a game-leading 7 points. Tianna Warwick-Dawkins grabbed 5 rebounds and blocked 1 shot in the first ten minutes. 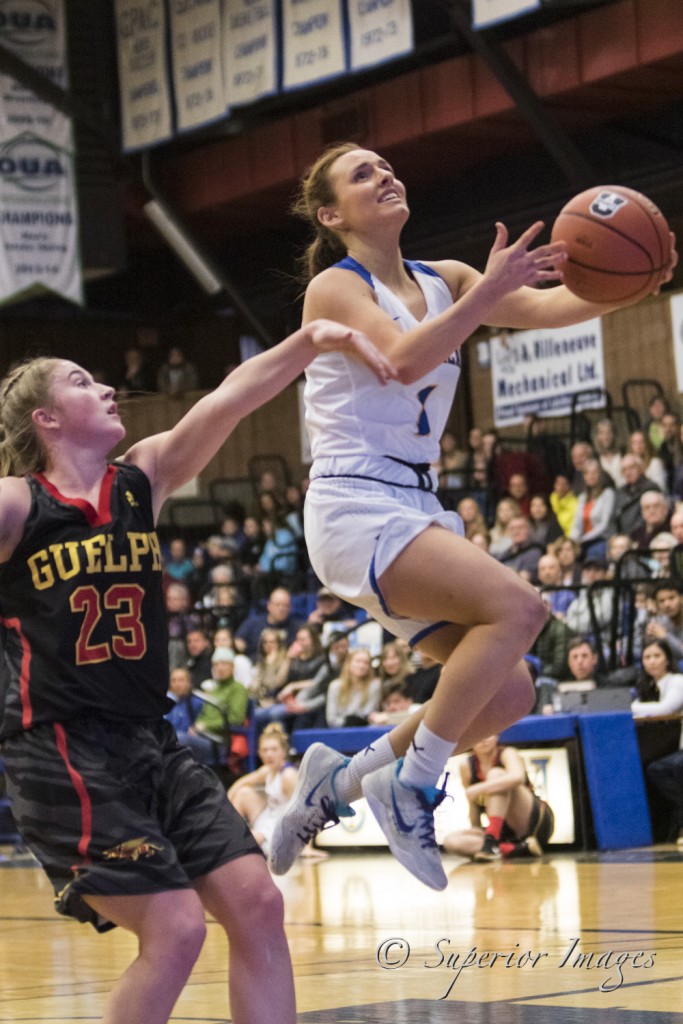 The second half saw the two teams battle to a stand-still, as each squad refused to relent. Lakehead again won the third quarter by a score of 19-18, making it 58-50 going into the final frame, but Guelph put together another 7-point swing in the fourth quarter to pull the Gryphons back into it. The Thunderwolves out-scored Guelph 11-8 in the game’s final four minutes to seal the outcome.

“We bent but didn’t break,” Kreiner said. “Our key players made key plays and shots the last 3 minutes to stave off a Guelph barrage from three.” 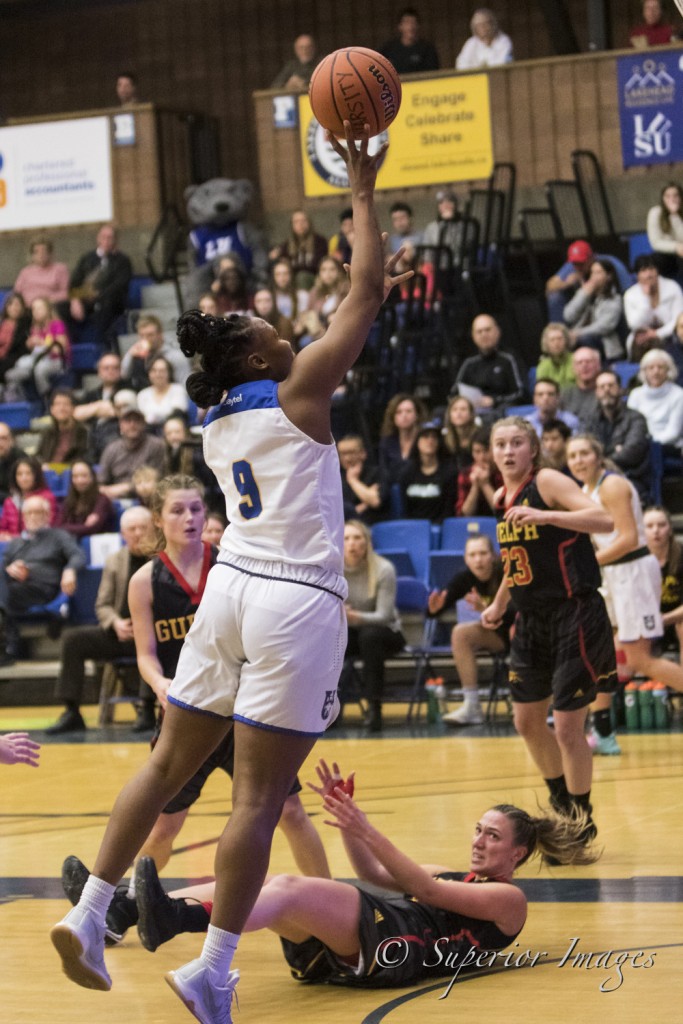 Guelph was led by Burke Bechard’s 14 points, 11 rebounds, 6 assists, and 5 steals. Modupe Okeowo led the Gryphons in scoring 19, including 3 of 6 attempted three-pointers.

The Thunderwolves were led by Leashja Grant’s 24-point, 9-rebound, 5-steal, 1-birthday effort. Grant went 11-18—61%—from the floor and finished the night with 2 turnovers in 22 minutes, despite seeing consistent double and triple-teams throughout the game. Karissa Kajorinne added 20 points, 3 assists, and 2 steals, and Tiffany Reynolds stuffed the stat sheet to the tune of 14 points on spectacular 64% shooting, 8 rebounds, 8 assists, 3 steals, and 1 block. Tianna Warwick-Dawkins added a gritty 9 rebounds, 3 assists, 1 steal, and 1 block. 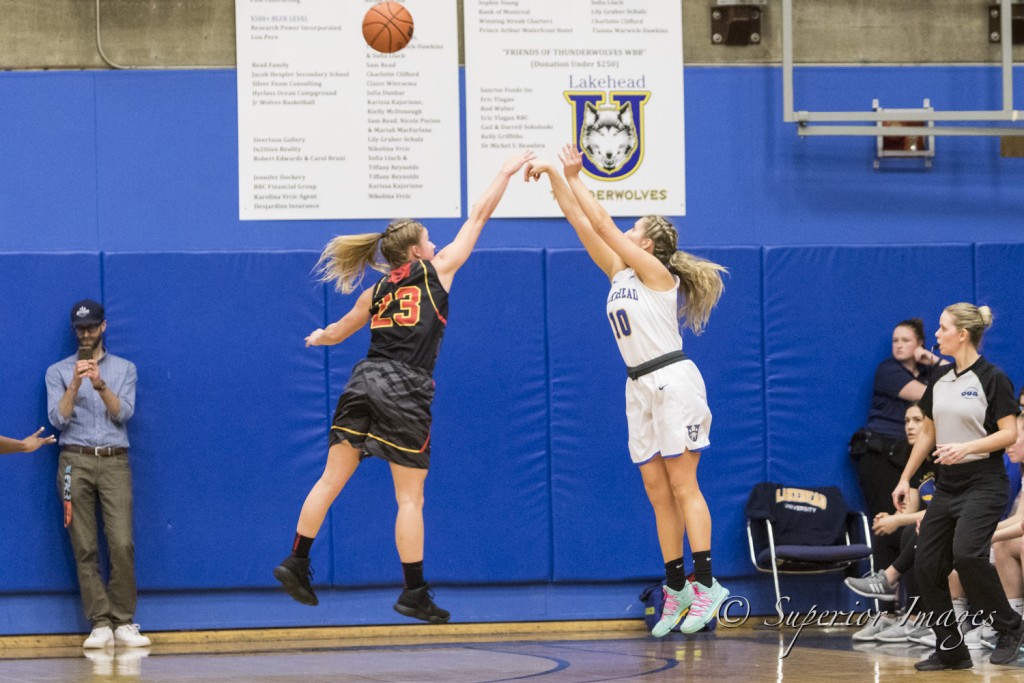 “I’m so proud of this group,” Kreiner said. “I’m looking forward to our game against Ottawa Wednesday.”

Lakehead will travel to Ottawa to face the Gee-Gees in the OUA Critelli Cup on Wednesday night.

Basketball games are available via webcast courtesy of OUA.tv