The men’s basketball team used a strong second half to stave off the pesky Algoma Thunderbirds, winning 79-60 on Friday evening.

It was an up and down affair early on, with Algoma hitting three 3-pointers in the first quarter, but Lakehead controlling the glass and pounding the ball inside.

“Our guys played hard and so did Algoma,” said coach Manny Furtado. “When you have 2 teams that play physical and hard sometimes it’s not going to look pretty.”

It wasn’t until late in the second quarter that Lakehead would hit a three pointer, which came courtesy of rookie Quincy Johnson. His front court mate Alex Robichaud splashed in another on the following possession to give Lakehead’s until-then stagnant offense the boost it needed.

Bacarius Dinkins was a beast on the inside, going 7-of-9 from the field, with 5 dunks. One was an electrifying alley-oop two-handed reverse (passed by Nick Burke) in the second half that seem to deflate Algoma, and elate the Lakehead bench and 500 strong in the Thunderdome. Dinkins finished with a game-high 20 points, 12 rebounds and 3 blocks.

The ‘Wolves interior defense continue to dominate the glass in the second half, as they stretched their lead to 16 in the third quarter. Algoma would make a few runs, thanks to the long ball, but failed to make it to the free throw line consistently, going just 1-of-7 from the charity stripe.

The Thunderbirds were led by Sean Clendinning with 15 points (6-14FG), with no other players scoring in double digits and three players grabbing 4 rebounds.

Taner Parrington scored his first double-double as a Thunderwolf, with 13 points and 10 rebounds. Nick Burke did a good job countering any full-court pressure Algoma offered, pushing the ball on the fast break to finish with 13 points, 3 steals and 2 assists.

Coach Furtado added, “We need to get ready for another battle tomorrow on a short turnaround.”

The two teams will rematch tomorrow at 3:00pm in the Thunderdome. Webcast will be available via OUA.tv 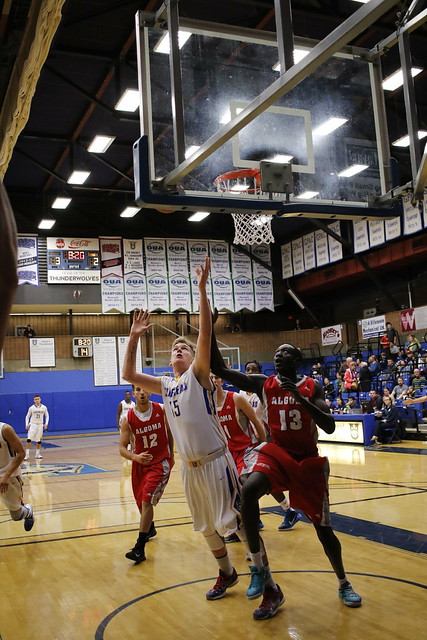