The men’s basketball team completed a weekend sweep of the Manitoba Bisons on Saturday evening with a 80-73 win.

It was clear after Friday’s game, and an informal scrimmage Saturday morning between benches, that both coach Furtado and his Manitoba counterpart had been busy fine-tuning their defense for the Saturday night game. While it paid off for Lakehead’s perimeter defense, Manitoba’s interior defense improved. That being said, Lakehead’s outside shooting was much improved, on this occasion hitting 9 three pointers, 3 compliments of Taner Parrington off the bench, who dropped in 16 points in the first half. The 6’5″ sophomore finished with a team- high 20 points and an assist on 8-of-11 shooting.

Conversely, Manitoba couldn’t muster much from the outside, hitting on just 1 of 13 long range shots. But they would find an answer in Keith Omoerah, who scored a team-high 19 points and 9 rebounds.

Halftime score was 45-44 for the Thunderwolves.

The third quarter was a good for the home side, the ‘Wolves out-scoring the Bisons 17-8. The visitors did mount an impressive rally early in the fourth quarter, and it was a 3-point game with under a minute to play. Thanks to some friendly bounces off the rim and some hustle on the glass, Lakehead secured a key offensive rebound that would be the back breaker for the Bisons. The final possession for Manitoba, who trailed by 5, was a flurry of three-point attempts, as Lakehead failed to secure the defensive rebound until Manitoba’s fourth shot missed. Rookie Quincy Johnson finally hauled in a board, then hit a pair of free throws with 1 second on the clock.

“Our guys competed hard this weekend. I’m real happy with the way they responded in a number of situations. We found a way to get the job done, ” said coach Furtado.

“We’ve got to get ready for Winnipeg now on a short week. Should be a great atmosphere with Alumni weekend and Homecoming 2015”

Bacarius Dinkins finished with 19 points and 7 rebounds for the ‘Wolves, while Mor Menashe and Alex Robichaud and scored 11 and 10 points, respectively.

The ‘Wolves next games are next Thursday and Friday, Oct 1-2 versus the Winnipeg Wesmen, women at 6pm, men at 8pm, part of Homecoming 2015. 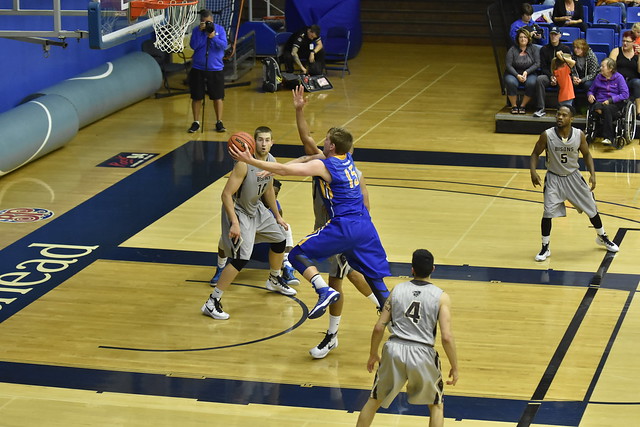