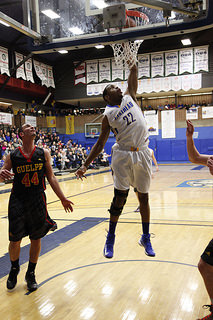 The men’s basketball team took care of business on Wednesday evening, winning 69-48 over the Guelph Gryphons to advance to the next round of the OUA playoffs.

The leadership of the team’s two graduating seniors, Dwayne Harvey and Anthony McIntosh shone through, as both 5th year seniors scored 14 points, with McIntosh grabbing 9 rebounds, and Harvey snatching 7 boards off the glass while dishing out 8 assists.

The ‘Wolves victory was far from assured after the first half, as Lakehead led 28-20 at the break. It was evident that the teams’ previous two meetings in recent days had familiarized one another with their defensive and offensive systems, leading to more or less of a stalemate early on.

It was Harvey and McIntosh combining for a high screen and roll that really cleaved into Guelph’s defense, repeatedly, and the Gryphons couldn’t stop to 2-man game without opening up Lakehead’s perimeter shooters who dropped in a three or two for good measure down the stretch.

One such shooter was Jamar Coke, who finished with a impressive 12 points and 12 rebounds. Mor Menashe score 12 as well, and Bacarius Dinkins scored 10 on 5-of-7 shooting.

Lakehead really made the Gryphons pay on the glass, out-rebounding them 45-21.

“I’m really happy for our guys tonight. They’ve competed and played hard all year and tonight was no different. We stuck to the game plan and executed down the ‎stretch.”

Lakehead advances to the next round of the playoffs, and will play the Carleton Ravens on Saturday at 8:00pm.