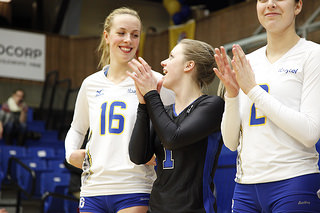 It was excitement for all who braved the elements to see the final volleyball game of the season, and the finale of two Thunderwolves’ careers on Saturday evening.

All four honorees played well, although Jen Casey’s evening was cut short following a lower body injury early in the second set. She had 3 kills and 2 digs.

Her teammates would perform well in her absence, as Sara Potter came off the bench to play the left side, and served tough for her three sets of action. Potter made 8 kills and 2 blocks with 11 digs.

The biggest surprise off the bench came in left side Olivia Bowman, who came in midway through the fourth set to make a big kill, and followed that with 9 incredible serves to drive Lakehead on a 10-0 run and put them in the lead, 18-14. The Warriors would end up closing out the fourth and final set to end the game.

Jasmine Fox, of Brunkild, Manitoba, had a big cheering section in the stands and would not disappoint them, making 9 kills and 23 digs on the night. Vanessa Masters had 29 assists for the ‘Wolves, and is slated to return to her role with the team for her fifth year next season.

Libero Breanne Hilhorst made 25 digs and anchored Lakehead’s service reception and defense, to the delight of her family members in the crowd who had made the trip from Killarney, Manitoba (as they always do) to see their defensive volleyball guru in action for the last time in the Thunderdome.

The Warriors were led by Shannon Lodoen with 7 kills and 5 block assists, while their libero Kristen Bartmann made 36 digs.

“I feel we played a strong game for the most part. We struggled tactically at crucial times. Athletes came off the bench to make major contributions. Kudos to Sara Potter and Olivia Bowman. Stephanie Chartrand was effective as well. This shows our depth. We now have to build off of this positive finish and keep developing. We must raise the bar on our expectations and how we get there.”

“A huge thanks to our fans here. We have seen a fanbase grow so much over the years and the girls know and feel their support! Onward and upward!”