The Lakehead Track and Field program is excited to announce the commitment of Braedan Prochnicki for the 2018/19 season.

“We are excited that Braedan has decided to pursue track at Lakehead this fall.  Since deciding to focus on running he has shown great potential and development in a very short period of time.  Coach Joe McDonough has done a great job with our Junior Development sprint group and adding Braedan to the varsity group will provide a strong athlete to help build this event group,” says Coach Kip Sigsworth.

“I’m happy Braedan decided to commit to Lakehead and make the full transition to Track & Field, he is certainly a rare talent and we’re lucky to have him. Since I began coaching Braedan he’s transformed from a football player to a top-tier talent in Canadian Track & Field. Braedan is a special talent; his work ethic and mentality are incredible. Rarely, do you find an athlete who invests in himself the way Braedan does; constantly asking for feedback and making adjustments. Every session we have Braedan is looking for ways to be better than he was yesterday, and those are the athletes we’re looking for here at Lakehead.”

In 3-months of training alone Braedan has managed to place amongst the top-15 U20 60m sprinters in all of Canada this past indoor season, clocking a personal best time en route to winning the 2018 Boeing Classic in 7.05s – which would already eclipse the current Lakehead University record by over a tenth of a second.

Braedan on his decision:

“I chose Lakehead University because of the atmosphere of the campus along with the opportunity to compete in sports. I had a full scholarship to play football at the University of Ottawa and the University of Queens but the location of Lakehead University, the atmosphere and my track coach were the deciding factors. I am looking forward to starting a new chapter in my life and I am especially looking forward to competing in track for the next following year and turning myself into the best possible sprinter I can be. I look forward to working with my new track coach Joe McDonough due to the way he runs this sprinting program, he reminds me a lot of my previous football coaches and what they did for me and that I love. I would like to thank my friends and family for helping me along the way in my decision-making process and I would also like to personally thank my football coaches Mike Doromko, Willy Crocker, David Peterson and Ryan McDonnell for turning me not just into the athlete I am today but also the type of person I am.”

Coming from Sir Winston Churchill, Braedan will be taking Kinesiology in the fall and plans to further his education into Physiotherapy. 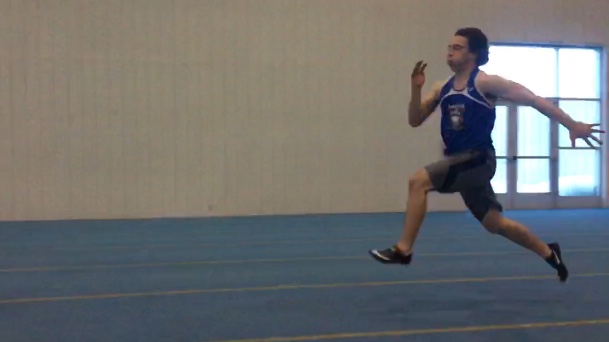