Thunder Bay, ON – The Lakehead University track & field team opened up their season this past Saturday, earning many personal bests and OUA Entry Standard performances.

The Thunderwolves now have 3 men ranked in the Top-8 in the 60m Dash in USPORTS; Junior Niko Dowhos 6.84, Freshman Zion Layoe 6.90 and Senior Braedan Prochnicki 7.03. Dowhos’ winning time also broke the facility record in that event and is the fastest time in the OUA this year.

“Overall, this was a great day — we are extremely proud of our team; and like we keep telling the squad… There is something different in the air this time around; we think this team is capable of some amazing things this year and today was a small glimpse of that potential” said Coach Joe McDonough. “Our men’s team has been hyper-competitive with one another these past few months and it really showed today in the 60m final” he added.

Lakehead Track & Field will be back in action at home January 7th before taking on the Windsor Can-Am Classic January 13th & 14th.
Full Results: https://sssaatiming.nfshost.com/lakehead/2223/opener/index.htm 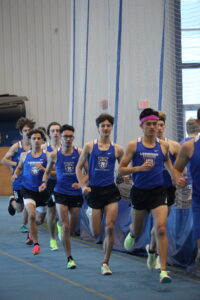