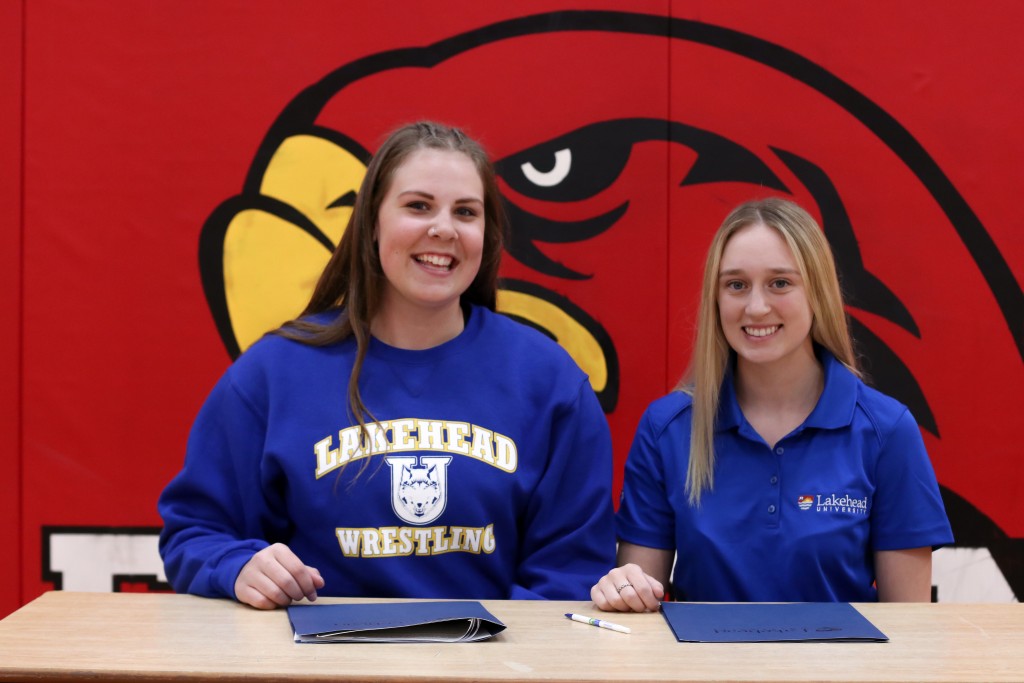 The Lakehead Thunderwolves wrestling team is pleased to announce the commitment of two more talented athletes to next year’s line-up. Kara Nixon and Rylie George, who both attended Centre Wellington District High School in Fergus, will be making their debut as Thunderwolves in the upcoming fall.

Kara Nixon brings skill and hard work to the Thunderwolves as she has competed in the OFSAA championships four years in a row, standing on the podium twice, once winning gold and the other placing fifth.

Kara is an all-round athlete that played hockey on a local team and rugby in high school. She was also presented with the Female Wrestling Award and the Centre Wellington District High School Athlete of the Year Award.

“I am so excited to continue my wrestling journey at Lakehead. At Lakehead I will be in the Concurrent Education Program with Outdoor Recreation, Parks and Tourism. I chose Lakehead because here I will be able to pursue my interests both through my program but also through wrestling. The many inviting, kind and cheerful people and also the beautiful town and many outdoor activities were also a huge factor. Overall Lakehead offers me a world of opportunity both through academics and also athletics.” – Kara Nixon

“Kara was OFSAA champ in grade 12 and 5th in her 12+ year. She has put in the work and was an excellent leader and role model for all of the kids on the team. She always has a positive attitude and tried to motivate the team when they weren’t working as hard as they could have been. She is willing to help out the other kids to refine their technique and she also made an effort over the years to help us out at the feeder schools. She is another excellent positive female role model for all young women.”

Along side Nixon, her teammate Rylie George will also be joining the Thunderwolves.

Rylie is a strong competitor that also placed at OFSAA 4 times, winning in 2016 and 2nd in 2014 as well as she placed 2nd at the National Juvenile championships at 46 kg in 2016.

Rylie says, “So thankful for all the opportunities this sport has brought me and the friends I’ve made because of it. Huge thank you to my coaches and training partners at the Fergus wrestling club and the Guelph Gryphons. Excited to commit to Lakehead in Thunder Bay and can’t wait to be a Thunderwolf.”

Coach Dave Ritter explains that “Rylie fully bought into the program over the years and in addition to our practices she wrestled club at the U of G for a while as well. Always a positive attitude and willing to help develop the rookies on the team. She also made an effort over the years to help out at the elementary school level to give back to her roots! She is also an excellent role model for young women in the sport.”

Rylie has enrolled in Lakehead’s Concurrent Education program with the goal of becoming a teacher.