The Lakehead men’s basketball team announced today that three talented local recruits would join the Thunderwolves for the upcoming season.

Jared Kreiner, Austin Burchat and Jayme Koski of St. Ignatius High School have all committed to the program and will be great additions for the future of Lakehead Basketball.

Jared Kreiner, the son of Lakehead women’s basketball coach Jon Kreiner, is a 6’3 guard with an outstanding shot and the ability to stretch the floor. He led his team this year to a regional title and continuously put up huge numbers all season. Jared will be studying chemical engineering in the fall.

“I couldn’t be more excited and honored to be a part of the Thunderwolves family”, explains Jared. “With Lakehead University’s strong engineering program and for the opportunity to play in the gym where I’ve grown up for the past 15 years, there wouldn’t be a more perfect fit. It’s like Jordan wearing a Wizards jersey; it wouldn’t be right to go anywhere else. I believe in Coach Thomson and his coaching staff and I am looking forward to getting to work with them as soon as possible”

St. Ignatius Falcons Coach and Thunderwolves Assistant Coach Matt Erdman expects Kreiner to become an “elite catch and shoot player and with his high basketball IQ being one of a coach’s son – it’s only fitting he’s a Thunderwolf.”

Austin Burchat will bring major size and strength to the Thunderwolves as a 6’10 center who will study Sociology and Concurrent Education.

“You can take the boy out of the north but you can’t take the north out of the boy. My dad, aunt and grandmother are all LU graduates and the school has a great support system and a coaching staff that is familiar with me. In addition they’re ready and know how to develop a big man like me! Go Wolves!” – Austin Burchat

Coach Erdman explains that “Austin has got better every year and there’s no reason to believe that trend won’t continue. With continued development, Austin is going to be a force in U SPORTS and will contribute a lot to the Lakehead program.”

Standing at 6’7, Jayme Koski is the third commitment for the ‘Wolves and will be looking to study General Arts. Koski led the Falcons with 32 points, 18 rebounds in this years senior boy’s high school championship win over the Sir Winston Churchill Trojans.

“I’m so thankful for this opportunity to be playing for Lakehead. After meeting Ryan Thomson, and seeing his vision for the Lakehead University basketball program come alive, I knew LU was the right choice for me. Coach Thomson is well respected, and he fuels his players’ desire to be great. I’m going to make it my mission to work hard towards Coach Thomson’s vision,” said Jayme.

Coach Erdman describes Jayme as a “versatile player who has a knack and understanding of the game and playing against higher level of competition is only going to foster his growth.”

“It’s been incredible to see these guys grow as much as they have. I can remember them attending Spring League years ago and to see how much they’ve improved as players and matured as people is amazing. I’m lucky to get a chance to coach these three tremendous young men at Lakehead University and it’s a great opportunity for us to have three local kids who have come through the LU Spring Leagues and Camps as well as the Blaze basketball program now be a part of our Varsity Men’s Basketball team at Lakehead University. Each of these guys brings something different to our program, Jared and his shooting ability, Jayme and his versatility and tremendous long term potential and Austin with his size, strength and ability to control the glass on both ends. I’m excited to get to work with these guys.” 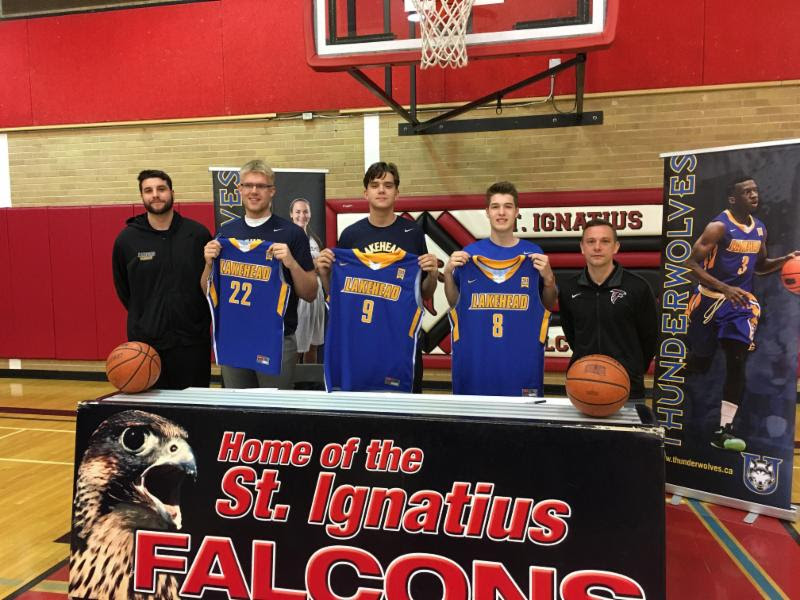