Lakehead’s men’s basketball team opens its regular season this weekend at the CJ Sanders Fieldhouse against the Algoma Thunderbirds. The matchup represents a showcase of youth, as the two squads carry a combined 13 first-year players between them.

“It’s exciting to get OUA play underway after a long off-season and a pre-season full of learning and growing for our guys,” Thunderwolves head coach Ryan Thomson says. Lakehead’s men finish the preseason with a 2-4 record, including a home sweep of the University of Winnipeg, and two narrow losses against the University of Regina, losing by a combined total of five points.

“Algoma is a tough team and a good first test for us to start the season,” Thomson says. “We need to share the ball and commit to the defensive end, particularly the defensive glass to be successful.

The men’s teams will take to the court following the women’s game, at 8pm on both Friday and Saturday. 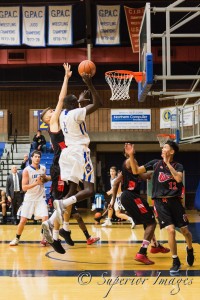