Lakehead’s men’s basketball team lost to the Brock Badgers 87-83 in the first round of the OUA playoffs tonight, and with the loss comes the end of the Thunderwolves season. Lakehead finishes 10-15 in OUA play including playoffs. The loss marks the second to Brock in three games—despite the 1-2 record against the Badgers this season, Lakehead still outscored Brock by 15 in all three games combined.

The Badgers move on to play the Western Mustangs in the next round, while the Thunderwolves return home to lick their wounds and begin preparations for next year. 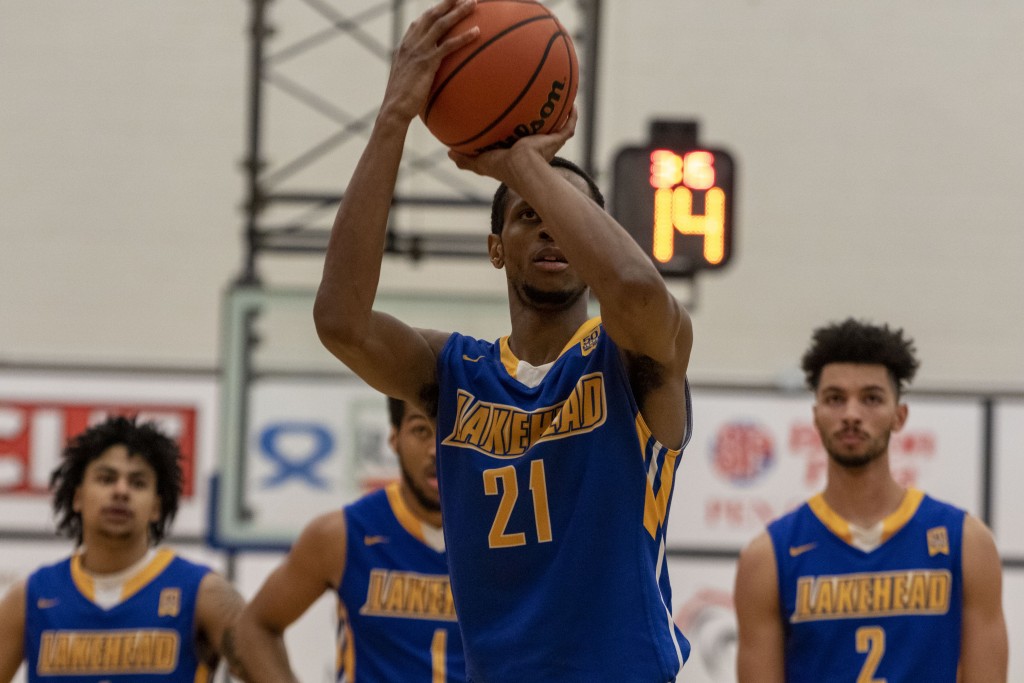 “This was a great battle from a team that stayed together through some ups and downs this season,” Lakehead coach Ryan Thomson said. “I’m proud of the way our guys competed and worked to get better both individually and collectively.”

The game began with both teams pushing the ball and trading buckets, as the lead changed hands 14 times in the first quarter. The Lakehead team fought back against a Brock barrage led by Cassidy Ryan’s 12 first-quarter points, but by the end of the first, the Thunderwolves were down 27-23. 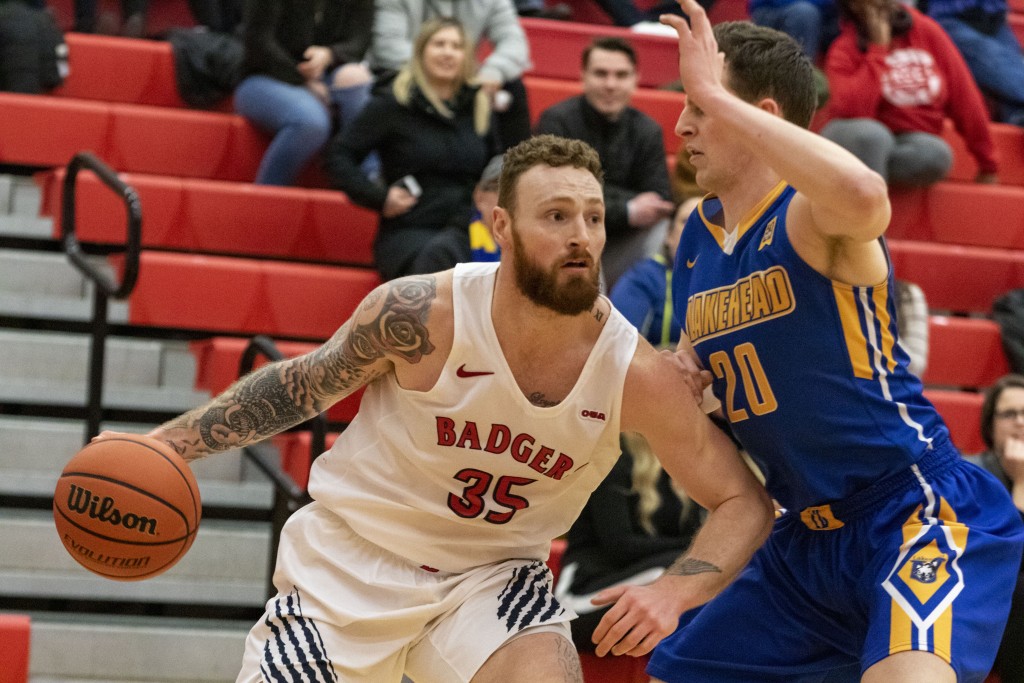 The second quarter saw Isaiah Traylor respond with a 14-point barrage of his own, and Nick Burke managed to score as time expired in the half, but the Badgers were still able to extend their lead, adding a point of difference to go up 49-44. Traylor led all scorers at the half with 18 points on 5-8 shooting, but Brock’s Cassidy Ryan was right behind him with 16 points on 7-13 shooting.

The third saw the Thunderwolves open scoring with a deep three from Isaiah Traylor to bring Lakehead within two of Brock, but the Badgers quickly rebounded, pushing their lead out to 13 midway through the quarter.

The Thunderwolves mounted a response of their own, however, when Nick Burke stole the ball from Brock’s Cassidy and passed it to Isaiah Traylor, who in turn lobbed it up on the break for an emphatic tomahawk alley-oop dunk from Davarius Wright. The Lakehead squad clawed back within six with another buzzer-beating bucket, this time from Alston Harris, made it 71-65 for the Badgers going into the fourth.

Lakehead was able to out-score the Badgers in the fourth, but ultimately it was not enough, as several fleeting moments of hope for a comeback bounced away with missed Thunderwolves shots and made Brock free throws. Lakehead went 4-8 from the charity stripe in the second half after shooting 10-11 in the first.

Lakehead was led by Isaiah Traylor’s 32 points, 5 rebounds, 3 assists, and 3 steals, and Nick Burkes’s 15 points, 7 rebounds, and 5 assists, and 1 steal. Lock Lam again anchored the Thunderwolves on the defensive end, grabbing 11 rebounds and 1 steal, and blocking 4 shots, in addition to his 5 points and 2 assists. Davarius Wright and Alston Harris came off the bench to contribute a combined 23 points, 11 rebounds, and 3 steals. Michael Poirier, Quincy Johnson, and Jack Bull added critical defense and two-way play to steady the Thunderwolves squad. 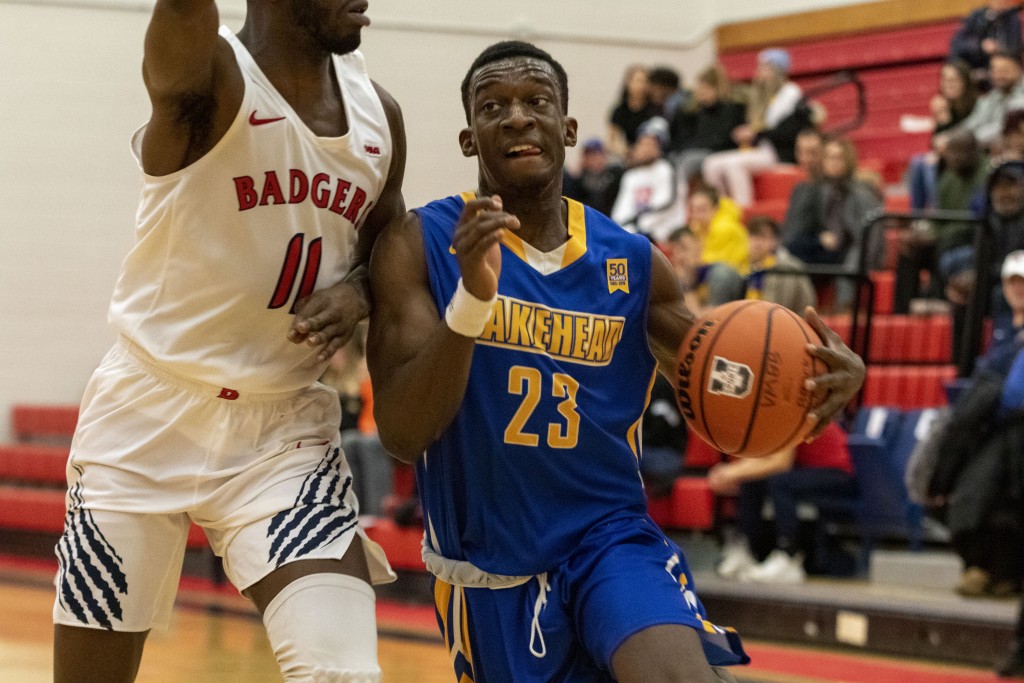 “Our seniors were terrific,” Thomson said, continuing: “I can’t say enough about Jack, Burke, Po and Darnell. Those guys were invaluable to everything we tried to do both on and off the court and will be missed tremendously.”

Though the loss ends the Thunderwolves’ season, the team can look back on the steady improvement of the last year and forward to what’s the come. Lakehead returns 68 points, 34 rebounds, 8 assists, and 8 steals from tonight’s production.

“It’s an exciting time to be a part of this program though,” Thomson said. “A huge part of our core will be back next year and will be hungrier than ever, understanding what we want to accomplish next year.”