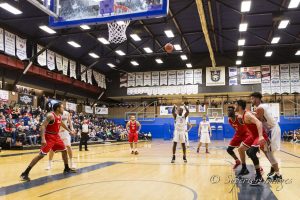 The Lakehead Thunderwolves men’s and women’s basketball teams will be travelling south to face the Brock Badgers in St. Catharines, ON on Friday, Nov. 15 and Saturday, Nov. 16.

The Badgers are sitting in the first place spot in the OUA Central division and hold a 4-1 record so far in the 2019-20 season.

“Brock is a very explosive team that can hurt you in many ways,” said head coach Jon Kreiner.

“We will be focusing on the continued development of our defensive system and ball movement on offence. We have a tough challenge ahead of us but we are looking forward to it.”

After starting the season 5-1 the Thunderwolves men’s team cracked the U SPORTS top ten list and have been ranked as eighth in the country. They currently sit on top of the OUA Central division standings.

The Badgers have a win-loss record of 3-2 this season and sit third in the OUA Central division. Since 2014 the Thunderwolves are 5-8 against the Badgers. The last time these two teams met was last season in for a quarter-final match-up that ended the Thunderwolves 2018-19 season.

“This week should be a good test against a physical and tough Brock team,” said head coach Ryan Thomson.

“Brock plays with a great deal of effort and they execute their actions well. We need to be disciplined on both ends of the floor.”

The women’s games will start at 6:00 p.m. and the men’s teams will play at 8:00 p.m. on both days. Thunderwolves fans can find the games on OUA.tv.