Weekend of Wins for the Thunderwolves

After more than a year away from the Lakehead, the Thunderwolves Athletics pack returned with a dominating howl. The weekend saw a three-day flurry of local action, and local fans were welcomed back with a perfect sweep. 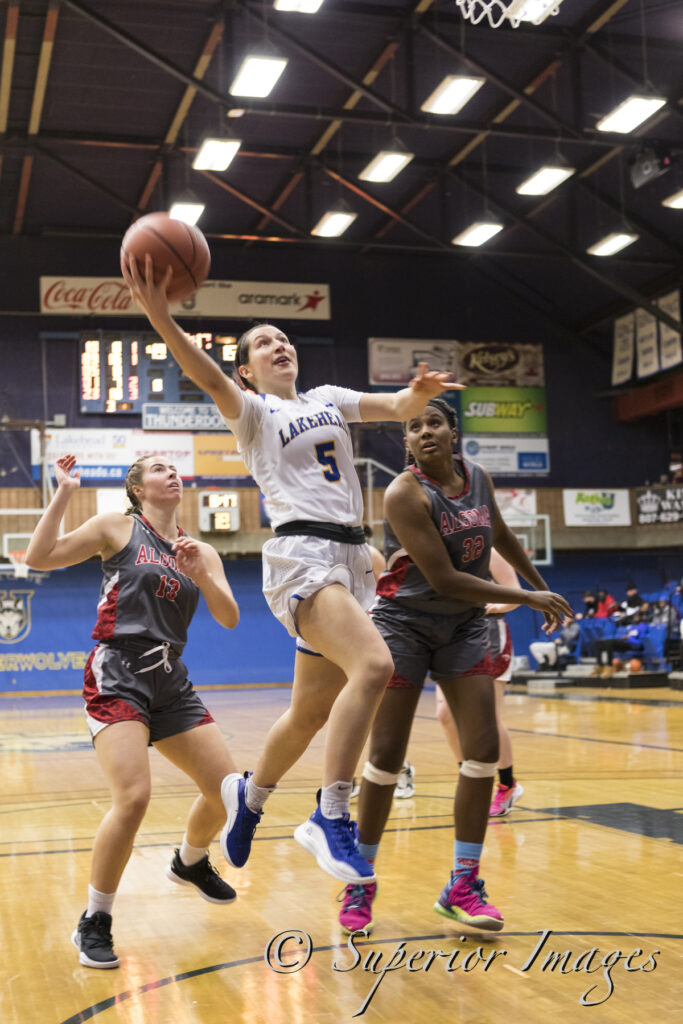 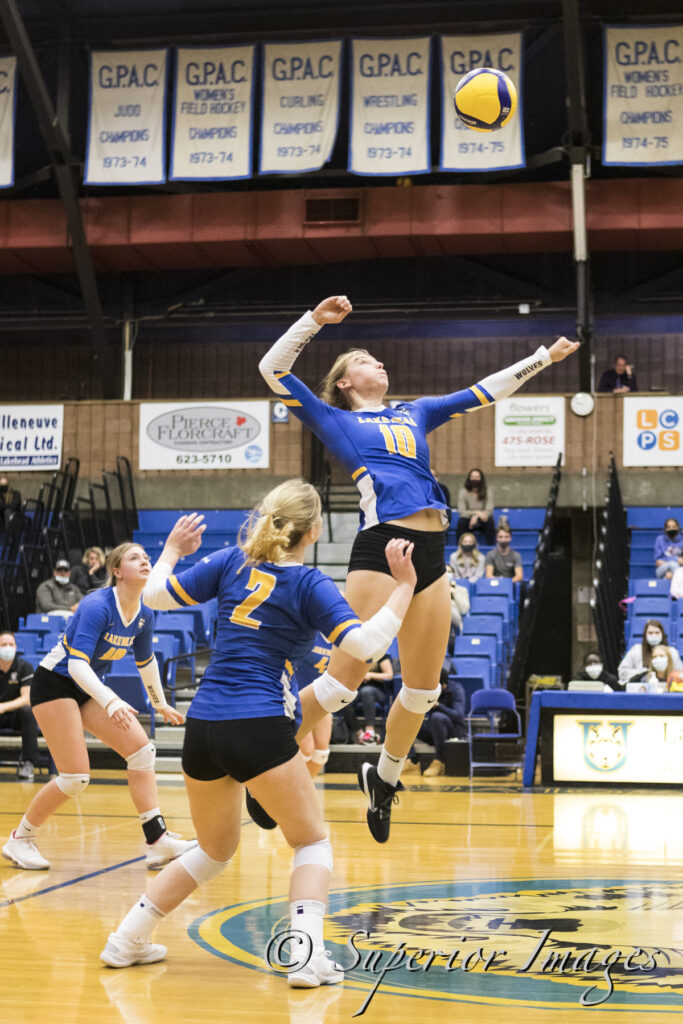 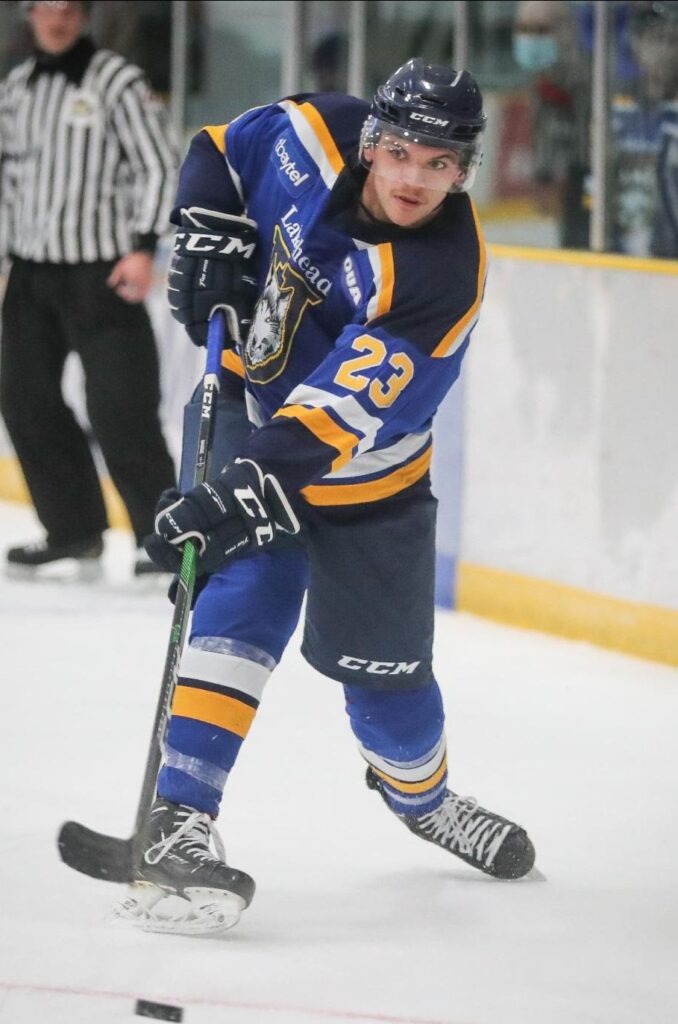 The men’s hockey team were the first Wolves to emerge, and emerge they did. Head coach Andrew Wilkins had his squad explode out onto the ice against the Northland College Lumberjacks, scoring three goals in barely more than the first minute of play.

“It’s great to be back playing games in front of our fans at the Gardens,” Wilkins said.

Northland College netted two shots of their own in the first and added a third early in the second period to hold the game within reach, but Lakehead scored a fourth goal in the middle frame and carried the 4-3 lead to a win at the final buzzer.

The offence chances were nearly even as the Lumberjacks finishing with 31 shots on goal, two fewer than the home team.

The Thunderwolves men’s hockey team doubled down on their winning efforts on Saturday, matching their goals from the first game in a 4-2 victory over Northland College. The rematch saw the visiting skaters take an early lead, scoring two after the ‘Wolves put one on the board, but three Lakehead goals in the final frame sealed the deal for the home team.

“Within each game we had some good stretches of play,” Wilkins said. “Everyone on our roster was able to get minutes and contribute, but we have a lot to work on moving forward in getting ready for York.

Men’s hockey will next take the ice on Thursday, November 4th as part of a three-day tilt against the visiting York Lions.

The men’s hoop team was busy in the other bay this weekend, visiting the Nipissing Lakers in North Bay. Head coach Ryan Thomson guided his squad to another perfect weekend, capping off an undefeated preseason schedule.

The Thunderwolves won each game with a single-digit margin, finishing 84-79 on Friday and 94-85 on Saturday.

“Two competitive games against Nipissing,” Thomson said. “It was a good way to finish the preseason.”

The men’s basketball team has a number of new faces this year, and so Thomson welcomed the close matches as a challenge to his squad.

“The Lakers were able to disrupt our offense effectively with their switching and put us in tough spots defensively with their ability to post some of our smaller guards,” Thomson said. “We did a good job of maintaining composure and playing through some adversity to overcome a slow start on Friday.”

The weekend sweep follows an earlier sweep of the Manitoba Bisons in Winnipeg by a combined five points, including one overtime finish.

The men’s basketball team will host the Brock Badgers on Friday, November 12th and Saturday November 13th after opening OUA play away against the McMaster Marauders on November 5th and 6th.

Back in Thunder Bay the women’s basketball team turned in the most dominating performance of the weekend, winning two straight against the visiting Algoma Thunderbirds by a combined 65 points.

“I was very happy with our first game back in the Thunderdome in well over 600 days,” head coach Jon Kreiner said. “Our energy was great and it didn’t dissipate.”

The home team jumped out to an early 26-5 lead, led by veteran leader Tiffany Reynolds’ 8 first-quarter points and countless defensive disruptions. Lakehead added another 21 points in the second quarter while holding Algoma to 10. The final buzzer recorded a game score of 78-39 in favour of the hometown hoopers, much to the delight of their fans.

“It was amazing to see such a great crowd in the Thunderdome,” Kreiner said. “It’s just a fantastic feeling to play well in front of our fans.”

Saturday afternoon saw Algoma keep things closer through the first quarter, but ultimately it was more of the same.

“Our energy was lower,” Kreiner said, “but we still played a strong defensive game and our pressure gave us enough offense in the second quarter.”

The final score was 66-40 in favour of the home team in blue.

“It was great to get two wins at the Thunderdome and we now need to prep for OUA league play,” Kreiner said.

The women’s basketball team will host the Brock Badgers on Friday, November 12th and Saturday November 13th after opening OUA play away against the McMaster Marauders on November 5th and 6th.

“It was so nice to be able to play in the Thunderdome,” Hagarty said. “Our team was so excited to play at home and it was a good experience to get the nerves out and play in front of the fans again.”

Lakehead won the games by a combined 37 points, with Hagarty spreading opportunities across her bench.

“We have a pretty young squad this year, and this was the first time playing at home for a lot of us,” Hagarty said.

The home team was paced by veterans Virginie Franks, Rebekah Hara, and Hannah Shortreed. Franks punctuated the squad’s offensive efforts with a number of booming hits facilitated by Shortreed’s precision setting, and Hara steadied the defensive efforts from the libero position.

“I thought we did a really good job at managing the speed of Providences outside attack and made adjustments where necessary,” Hagarty said. We passed really well on Saturday night, and we continued that into Sunday afternoon. We were able to take control of the match with our tough serving on Sunday.”

“We really relied on the leadership of Shortreed, Franks, Hara and Megan Nahachewsk) to keep the court calm and make big plays when we needed them,” Hagarty added. “Some of our second year players—such as Hannah Ginger—have really impacted our line up and have been able to find ways to score and bring fresh energy to the floor.”

“We look forward to starting our regular season at home and will use the momentum and learning opportunities from this weekend to help us prepare,” Hagarty concluded. “This weekend was a great end to our preseason.”

The women’s volleyball will host the McMaster Marauders on Friday, November 5th and Saturday November 6th to open OUA play.