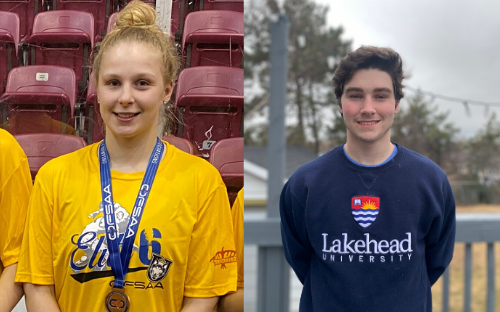 Lakehead Wrestling is pleased to announce that Ashlyn Sweizter and Adam Lafroy will be joining the Varsity Wrestling program this fall. Ashlyn and Adam are both graduates of St. Ignatius High School, where they were coached by Lakehead Alumni Shane Comeau.

Ashlyn joins a large group of Lakehead Wrestling club members that have wrestled through the system from an early age, and has experience working with Thunderwolves head coach Francis Clayton. “She will make a smooth transition to University Wrestling,” says Clayton. “She has proven to be a hard worker and is committed to the sport.”

“I’m excited to be a varsity wrestler at Lakehead University and am looking forward to the upcoming season. I am grateful to be able to represent my hometown of Thunder Bay. The excellent coaching staff and my new teammates will help me to maximize my potential as a student athlete. I am very thankful for my past coaches, teammates, parents and others who have helped me along the way to this point in my athletic career.” says Ashlyn.

Ashlyn will be enrolling the Biology program here at Lakehead, and is hoping to focus in Animal Sciences.

“Adam Lafroy is perhaps one of the best teammates that any program could hope to have.  The Falcon wrestling team has enjoyed great success over the years and one of the reasons is the great leadership from senior wrestlers,” says Comeau. “Adam is among the very top leaders that the St. Ignatius wrestling program has ever had.  He is a completely selfless and committed leader, as well as a ferocious competitor.”

“I am extremely excited and motivated to train and compete with Lakehead University in the fall.” says Adam.

Adam will be majoring in Math during his time at Lakehead.