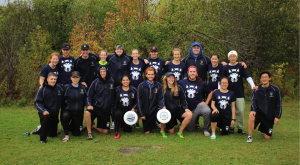 Lakehead Women’s began an early morning on Sunday to continue CUUC II playing Dalhousie University. The ladies came out strong, playing hard defense, starting with a 4-1 lead. At half time Dalhousie was only able to get two more goals as Lakehead took the half 8-3. Heavy rain, strong winds, and 2 injuries attempted to slow down the Thunderwolves, but they took the game into time cap winning the game 13-6. Lakehead advanced to the semi-finals. The ladies faced an experienced and former Division I silver medalist team, Guelph University. The Thunderwolves started to a slow start, however continued the game with high spirit and great composure. At the end, Guelph took the game 15-8 and advanced to the finals. Due to poor weather conditions the bronze medal game was cancelled. Lakehead Women’s team tied for bronze – a great accomplishment for Lakehead.

Below are the stats for the Lakehead Women’s vs. Dalhousie Women’s: 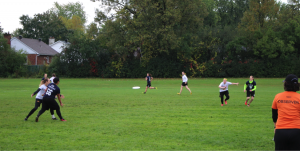 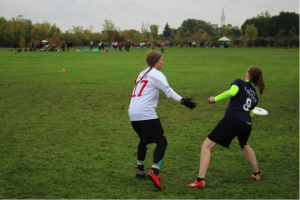 Lakehead Open started CUUC II’s Sunday morning playing Bishop’s University. The men started with a great start breaking Bishop’s defense multiple times, putting the score at 5-0. The raining conditions faced no match to Lakehead’s amazing offense. Bishop tried to come back, but Lakehead’s shut down defense was too much for them. Lakehead finished the game 15-8. Jake Grace’s throwing skills allowed Lakehead’s offense to play with great flow and efficiency. Handler, Kyle McGillivray, finished the game with a total of 4 goals. Additionally, hard gritty defense was played by Benjamin Hadden and Seongjun Lim. Lakehead completed CUUC II with a 2-2 record and placing 15th out of 23 teams. 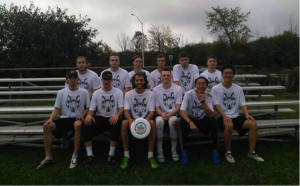