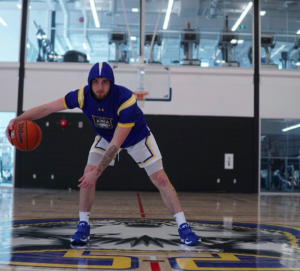 The Thunderwolves Men’s Basketball program is pleased to announce that 6’5, Burlington native, Tyler Sagl has committed to competing for the Thunderwolves beginning this 2022-23 season. Tyler joins the Thunderwolves from Marist College and Lincoln Prep. Tyler looks to continue to build off a successful basketball career at the college and high school level.

“We’re very pleased to be able to add a player of Tyler’s caliber to our roster, he brings a high level of shooting, physicality and versatility” said Coach Ryan Thomson “We’re looking forward to working with Tyler and helping him reach his goals!”

When asked why he chose Lakehead, Tyler said “I chose Lakehead University because they have an amazing coaching staff, the program is top notch, with great facilities and they have one of the best fan bases in the country.  I’m super excited to get to work.  #RunWithUs”

Sagl will be joining the Thunderwolves for the 2022-23 season while completing a degree in General Arts.