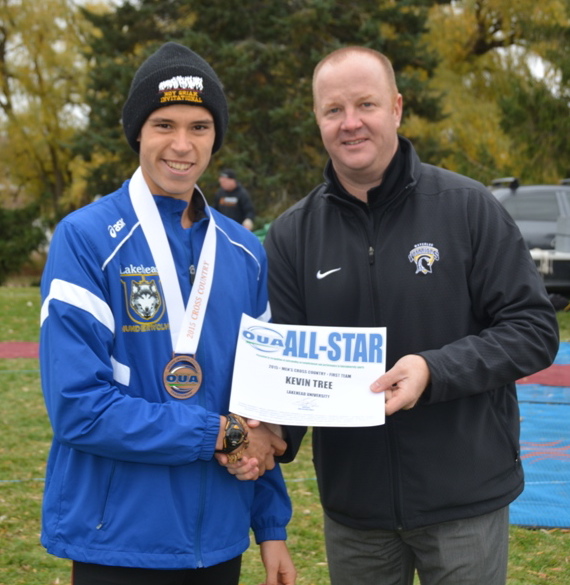 It was a successful day for Lakehead’s cross country running teams at the OUA Championships, as the men placed 5th and the women 9th overall. Kevin Tree ran an exceptional race, placing a career-best 3rd at OUA’s and earning a spot on the OUA’s first All-Star team for a second year in a row.

In the men’s race, there was a big lead pack of about 12 for most of the first 7km of the race with Tree doing most of the leading of this group. On the last lap Alex Wilkie (Queen’s), Paul Janikowski (Windsor), and Kevin Tree broke away and it was from this group that the medals would be decided. With about 500m to go Wilkie and Janikowski put in a quick surge that Tree was unable to cover, despite chasing hard over the last stretch he wasn’t able to close the gap.

“Overall a good day for Lakehead Cross Country Running – the girls were ninth which is a nice improvement over last year and about where I was hoping they would be,” says Lakehead coach Kip Sigsworth.

“The men battled hard in a very competitive field. I was hoping we would be able to catch Queen’s and finish 4th but they were just a bit better than us today. Tree ran great today and proved once again he’s capable of running with the best guys in the country.”

In doing so Tree reached his goal of a top 3 finish at OUA’s, and sets his sights next on the CIS race in two weeks’ time, hosted by Guelph, where he hopes to lead his team to even better results.

Kevin Tree is just the fourth Lakehead runner to ever capture an OUA medal. Kimmo Ahonen (silver, ’98) Karl Saidla (Bronze, ’00) and Jaclyn Hutton (Silver, ’00) are the others.